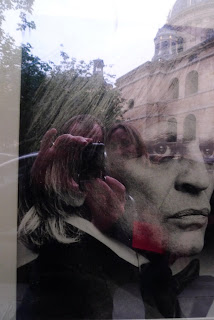 Again, I have no access to my photo library. So I dig through my wife's collection, reminiscing. Here is one where we happened upon the famous actor Klaus Kinski on the streets of Paris, as we were headed towards the bar where Oscar Wilde was shot dead by poverty and shame.  Apparently the hotel was quite a shit-hole when Wilde died there, but it has built a reputation on being in a duel to the death with the wallpaper....


If you have never seen the move "Fitzcarraldo" then please stop reading this site.  I am trying to cultivate a certain type of reader here and clearly you are not among us.

Once you have seen "Fitzcarraldo" out of deep penetrating guilt, then you should move on to "Heart of Glass","Cobra Verde", "Nosferatu the Vampyre", "Aguirre, The Wrath of God", Stroszek", "Woyzeck", though not necessarily in that order.

I have never seen "The Enigma of Kasper Hauser", if I haven't done so by the end of the summer then I should stop writing this blog, clearly I don't belong here either.

No, I kid.  I am not as much of a snob as I pretend to be, but pretending's fun, as Ryan Adams says.

I wrote that last night before I went to sleep.   When I awoke this morning my mouth was dry.  It was a combination of drinking beer and eating a salty chicken dinner, but mostly drinking I would imagine.

I had terrible dreams last night.  I was out having beers in the afternoon with a friend and I was recounting a story about the past, one in which I had been shot at with a handgun.  It must have been part of what triggered these awful dreams.  That and what I had written above last night before going to sleep.

Within the dream I had murdered a person and killed a cat as well. The person I murdered vaguely represented the guy who opened fire on me in real life. I think the cat must have witnessed it or something. Who knows.  Once you are on a killing spree in a dream no real lines of logic are necessary.  Then I was trying to cover it all up. There were no bodies but the evidence started piling up against me, and around me. In the dream I began to realize that there was simply way too much evidence. There were work records, journals, calendars, cameras.  I was suddenly surrounded by possible undoings.  So I awoke, guilty and with a dry mouth.

My wife had taken the dog to work so there was no one here to console me in my deadly criminal state.

I put on "Aguirre, The Wrath of God" and started to watch but it was too much for me, too brutal.  I know how it all ends.  It is the movie that Francis Ford Coppola heavily borrowed from for "Apocalypse Now."  The film ends in an hallucination of violence.  Perhaps not the film to be watching this morning...

I must go and eat a sandwich made of egg and cheese, maybe ham, and pretend that today will be different.

If you chant this out loud, with increasing volume and severity you begin to sound just like Klaus Kinski: 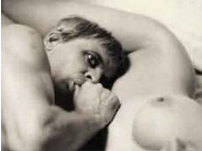