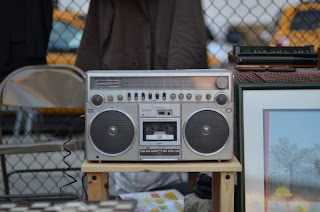 Last year when this site was in its early fledgling-reporter days this faithful community watchdog of yours published a potentially serious health risk expose concerning the neighborhood.

The full account can be read here....  Religious whistle-blower, I.


It was all speculative, of course, but jesus crispy, isn't that how one accumulates wealth presently?


Well, it turns out that the flea market is jumping again.  Now the crazed thing happens once more on the inside of the gates, and it is a genuine weekend extravaganza, a spectacle, a real freakin' bazaar. 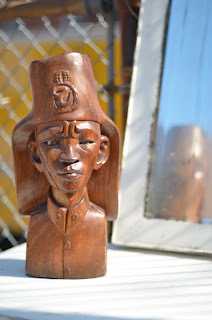 Where else might you find such utter curiosities, such relics....
and these oddities were nearly abandoned as useless remains, deserted...
They spring back to life here as casual commerce.
I found an old videotape in a disused cardboard box called, "One Man's Junk"
Very telling, no? 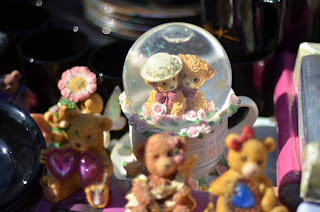 I am cursed with this evil witchy world of ours, and of course amused.
I walked into this open coven with some friends of mine just this last weekend. After what could not have been more than a few minutes I had to text them to find out where they had gone, why had they left me....
I imagine that heaven must be this way also.
Time stands, 'till.
I occasionally casually pray there will be free-texting and wi-fi up above on high. Though I've heard rumors Verizon got the deal.  Apparently The Holy Spirit liked the name of the company.
In the Hereafter they'll be know as "Event Verizon        "
It's a very composed branding decision, very sensible. 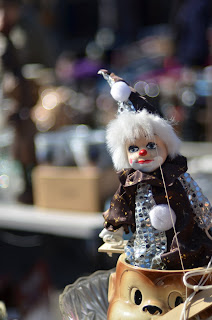 The unforgivable sin... blasphemy to the holy Sprint....
All non-venial sins aside, mounting a puppet harlequin inside a monkey's cookie-jar brain.... really?
I swear here and now to you, my unswerving and mostly Catholic readers, worldwide and beyond... I did not stage the picture above. That is exactly how nature intended monkeys and fools to coexist.
Ok, I'll admit it... I'm not sure if that's a monkey or an Eddie Munster bear, but I am absolutely positive about that evil exaggerated carny possessing its poor primate skull.
Unless its a bear, of course, then we'll go with "Ursidae Cranium" instead of primate skull.
Hmmm, no real ring to it...... Ursidae's not a phrase that's exactly sweeping the nation.
Who is sweeping the nation any more?
Fuck this!!!!  THAT ceramic is pure porcelain primate.
Bears can suck banana as far as I'm concerned.
But c'mon, let's not argue.... we're all carnivores here, right?
For purposes known mostly to me, I prefer to believe it's a monkey, and probably will.
What self-respecting primate among us would not house a harlequin or two in their whore's attic? 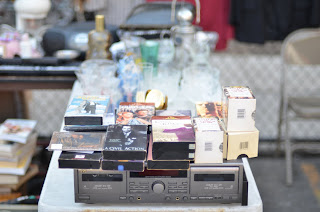 I might even have room for a few old mix-tapes, just some monkey-businesses....