The known structures of the universe 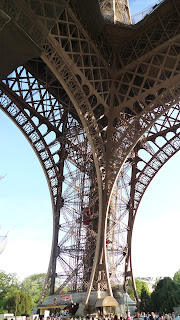 My computer is in the shop. I couldn't take it any more. It was catastrophically failing. The warranty was expiring. It has disappointed me, like most other technological devices.  They are a little bit expensive for what they do; computers and phones and similar products.  The "wow" factor runs very high with them, but also runs both ways.

I do like my cameras, as far as devices go.

As I am not on my computer, with access to my photo library, I have had to find some photos on my wife's computer. There were only two events in the whole of her photo library: our wedding and our honeymoon.  It was a sweet discovery, I must admit.

Below you can see the shadow of The Eiffel Tower leaning eastwards towards the horizon as the sun begins to set across Paris.  It was a charmingly memorable moment. 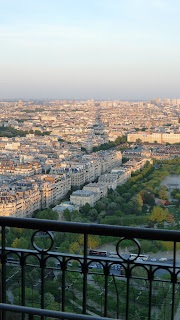 Here she is before ascending the famous iron lattice, wandering from the Champ de Mars, among the other tourists, one more creature dizzy with love.... 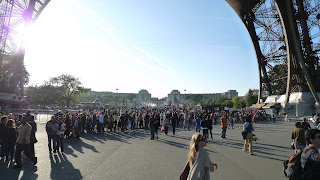 The tallest man-made structure in the world before The Eiffel Tower was The Washington Monument, at just over half the height and opened to the public only about a year before it. Those crazy French were not to be outdone by an upstart nation, you see...  It took 41 years before The Chrysler Building overtook the tower, then the French added communications antennas on the top in 1957, once again surpassing Chrysler, though the race had long since been lost to The Empire Building by then.


It is a little too early to be reading so much wikipedia this morning..... there is much work still to be done.