"... with love in her eyes and flowers in her hair" 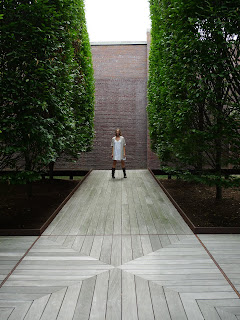 You would think with my wife being temporarily gone that I would have even more time, not less. But the opposite is true. I am about to rush out the door to go to work, pressed for time, rushing from one place to another, half crazed with all that is soon impending.

Rachel keeps me from a complete loss of civility.  I see that now.  I walk around the apartment and I notice that things are different when she is not here.  It is not that things are out of order, yet.  But it is just that it takes no time at all before it is entirely my things that have occupied the little space we share.  Everything is less dainty, though it is the exact same set of stuff that is always here.

The dog's bowl is somehow more male now than it was just a few days ago.  Not messy, as such, but visibly the product of maleness.  Even the dog itself seems a little bit tougher, ready for action, surly.  It is nothing that I've consciously done, it just changed, almost imperceptibly.  He seems to have a five-o'clock shadow.

As I write this, looking at him he seems to be saying, what? WHAT?


I ran into somebody last night that reads these postings and they said that it is interesting to get a glimpse into what it is like to be aging in New York.  When I woke up this morning it occurred to me that I make it seem much more fun than it actually is.  I hope that I do.

Ok, I must run, the coffee has been made, it is finished, the shower complete, the clothes are where I left them on the couch, soon I will be rushing down the steps to get out, feeling the earth rushing up to meet my feet.