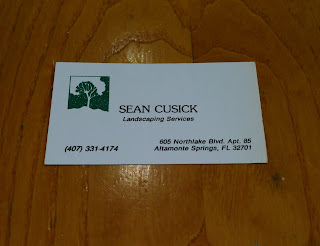 I found this card in an old book a few weeks ago.  It has been years since I thought of living at that address, or having that phone number, or doing landscaping in the sun, in FL...  I designed the card myself.  I was pleased with it and myself when I found it.  This was the apartment that I lived in when I began to have sudden and drastic changes in my life.  I had discovered house music, and all that accompanies it.  1989.

There are many stories to tell from that time but perhaps not this morning.  I will be working all day today, even though it is my day off.  There are two special projects to complete, one within my job, one without.

Perhaps soon I will find a new job and then I will tell some of the many stories about where I currently work.  Who knows.  I might be so tired of the stories that I won't want to tell any of them, even though many are funny.  One of the posts here that has received the most hits was this one.  I was genuinely angry about all of it as it was happening, but people found humor in it.  It's possible that it will be the same way with stories about my job.  Who knows.


Once I was asked to come into the human resources office.  There were some questions that needed to be asked about an incident.  There was nothing for me to worry about, but being in that office when the door is closed is a little bit unsettling, unnerving.  When I said so, the girl who I was speaking with said:

"Why is everybody so afraid of being in this office?"

"This is where people get fired."

"It's also where people get hired."

"Sure, but nobody's afraid of being hired."


Perhaps I should have been.