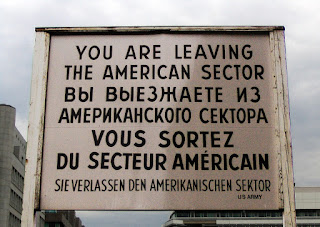 It is done. The memorial service that we drove to LA for was last night. There were photos and memories of the deceased shared. Torsten, originally from East Berlin. There was spiced sausage, potatoes, and other German foods served. He was a very sweet and thoughtful man. I met him a handful of times and found him to always be tender and sincere. Rachel's testimony was interspersed with tears, the surest signs of emotion escaping. It was all touching and sad, and beautiful, as you would hope it to be. It was a reminder to go to the hospital if you think you may be having heart problems. For me, it was. He knew something was wrong but did not wish to see a doctor. He died in his sleep. Men.

What I was most fascinated with were the pictures of him when he was young, before the wall fell. Mostly black and white snapshots, some color shots in the 80s, some of him as a child with his father in the late 60s. Glimpses of what life was like then. We were told there was no happiness on the other side, which was evidently untrue in these pictures. There was one of him as a young man at Checkpoint Charlie taken from the eastern side, opposing the American Sector. He was standing there by the now famous sign smiling. All of the images were of him smiling. Yet another reminder for me. There were others of him gleefully chipping away at the wall as it was coming down, surrounded by others looking and feeling likewise. I watched it all happen from television, nearly in disbelief. I remember the feeling, that of what must be a global celebration, as if goodness somehow won, or at the very least had a glimpse of a chance.

A portion of the wall was put on display at the Hard Rock Cafe in Orlando, a concrete symbol of the times.

We may go have brunch today with a few friends. There were a handful at the memorial last night. We have all grown older, of course, there is no surprise there. Though we all seemed content, if not happy. It was pleasant to see familiar and friendly faces. There is some softening with age, even as the lines of age deepen, the stories ripening in our voices. There was something satisfying to stand and chat with older versions of ourselves. Our boy running from room to room, being a boy, a child, prepared to take over something, practicing for the inevitable coup of time. I was charmed by it all. We seemed so at ease in our skin. So lovely, scarce, even precious. Our numbers now diminished by one.