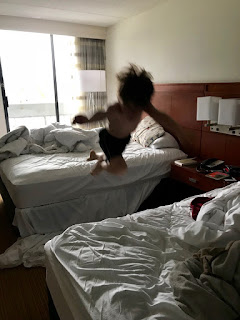 We meandered along the coast a little bit, stopped and had seafood lunch at Gladstone's, passed the old Getty Museum in Malibu before cutting up through Topanga to intersect with the highway that would eventually takes us north. After that it was highway driving home.

Near Bakersfield we stopped at a little place that specialized in selling citrus - oranges of all kinds. There was an unfinished dinosaur park out back still under what appeared to be suspended construction. There was a sign up advertising lama rides, though there were no lamas, no lama trainers. It was the type place that is disappearing from the landscape. I pictured Humbert and Lolita making a stop during America's better days.

I didn't take nearly any pictures while we were gone. I brought a camera and lenses but spent my time otherwise, mostly lounging around the hotel room watching golf or anything else that might put me to sleep or a state very near it. That is, whenever the boy was not jumping from one bed to the other.

It was raining there and it is raining here in Sonoma and will be for the next few days. I will lounge on the couch with a book and the wonder pup, Barkley. The sound and diffuse light from the rain coming in through the window will be our clock for the day. The sound of many seconds hitting the earth in rapid and random succession.