A St. Patrick's Day come and gone without a single beer or sip of wine. The day was over before I was able to adequately shame myself with the traditional liquid catalyst, my beloved behavioral elixir, the gin and jolly juice. Ah well, what can one do. My Irish heritage may soon be revoked. We live in a use it or lose it economy. I'm not sure how much of my heritage I actually inherited. I remember eating corned beef and cabbage and Irish stew sometimes when I was younger. I'll admit that they're both still dishes that can be liked when under extreme drinking pressure.

Beyond that, my Irish heritage seems nearly unrelated to my southern upbringing. I was never really very Catholic. Never at all a good one. I only inherited the soul squashing shame and the unlimited twee reverence for all things sacrosanct.

We went to the ILM theater in the Presidio yesterday which was super-cool for an old film nerd like me. There was a private screening of the film A Wrinkle in the Plot, with the visual effects supervisor, Rich McBride speaking. Though after watching the disaster unfold with the boy and his mom we did not stay for the Q & A session. I had only one question: Were the actors and director in this film all using the same script?

My rating system is based on a flat bottom threshold that incorporates my love for going to see any film in a theater, even if the film itself sucks, which this one very much did. No film can go below 50, but working your way down to 50 requires an orchestrated team comprised exclusively of failures  and a self-contained visual document of their failings.

I love to sit in the dark and watch light bounce off the screen, to see some type of story attempt to be told in light and sound. Truly, I love going to see films in the theater. Even bad ones can be interesting, sometimes more so. You can, when bored, ask yourself which teams backfired the most miserably from scene to scene. Sometimes I watch the credits only to try to determine which special effects unit was to be the most lauded for either highlighting or obscuring the script or directorial problems.

This film made those questions a little bit easier: it was almost always the script department. Special effects alone can not usually save a poorly told story. The writing became rewriting magically on the screen in front of us, then there were runaway last minute script edits, then maybe another rewrite, then a few on-set patches and possibly some very important plot bridging scenes cut from the final product.

Who knows, but there was big trouble in little Narnia. If you told me that this was the first fully crowdsourced script that made it to production then I would believe you, and I'd happily bump my score up to 55 for that.

Casting makes a noteworthy mention, also. Having such known stars mixed with the unknown kids that struggled to deliver their lines - especially that little evil shit that we all knew was going to turn on his family - was more than just a little bit off-putting. But the tremendous chasms in the plot were unforgivable and nothing could band-aid them back to the scab that was the final edit of the film. All of the lead actors were off-putting, at best.

Oprah looked like Superman's father, Marlon "Jor-El" Brando, after having been rolled around in a glitter pit for an afternoon or two. Seems as if she was perhaps cut from the all female remake of Ghostbusters as the Pillsbury Doughgirl that eats New York, then stopped by a pride afterparty for a few days before arriving on the set of Wrinkles. Ready for action, as it were.

Her parts seemed to have a lot of character direction in them: looks downward, smiles knowingly. I thought the idea was that we were supposed to be providing young girls and boys with heroic icons, not media moguls trapped in a well paid opium hallucination.

I have tremendous powers to willingly suspend my disbelief, just look at my own life, but this film tempted those upper limits. The actors demanded that you suspend everything in terms of faith in a story. They were there to appeal only to the parents that were in enforced attendance. You were not watching characters in a film but television personalities attempting to overcome the difficulties and limitations of their talents. I had to remind myself several times that Oprah Winfrey was once an Oscar nominee and that Reese Witherspoon once actually won for Best Actress.

There is no greater reminder of the past being over than is the present.

How did Mindy Kaling become older than me, and Reese Withersoon didn't help any. They both looked as if they had just given birth in a Chuck E. Cheese, or maybe to a Chuck E. Cheese. Reese's best moments were when she transformed into a flying cabbage leaf, an Avatar fern uprooted from middle earth and given a dose of ecstasy.

Zach Gallifuckoffis should be ashamed of himself, also. What a disappointing shill he's become. Yet oddly, his casting was one of the least distracting in the film. He plays an affectedly simpering loser that encourages kids to not be like him, which was the only truth I could cling to in this busted flush of narrative disaster.

Maybe it wasn't their fault. The book that this movie was based on is very popular but not very good. It's a collection of personal midlife confusions and adult regrets as told from an imaginary re-living of adolescence. It is designed to encourage kids that life becomes temporarily easier if you retreat into drug use when the time comes.

It's other message is quite simple: readily available time travel with eccentric strangers dressed in sparkles is the best way to bring back your runaway dad.

Speaking of, the actor that played the deadbeat dad, in real life, is a child molester. I have no proof of this but if you can watch that film and not feel protective of any nearby children every time he's on screen then you are part of the problem. It is only a matter of time before he is in prison. He seemed like either a defrocked priest or one who could not quite handle the moral rigors of seminary school.

Okay, I had not meant to write a movie review. I normally try to write about films and music that I love, to avoid the type thing that has just happened here. But I don't get to go see films of my own choosing any more. I'm trapped in the ongoing miasmic cinematic needs of a six year old.

My tastes in film lately fluctuate somewhere between Frozen and Coco.

Here is a Jedi pissing on the world. This should help to ease the pain. 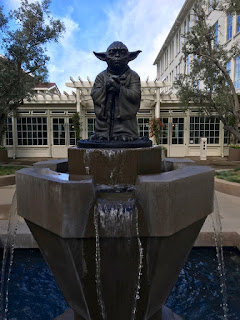