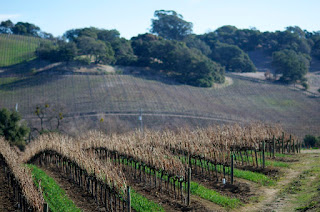 Yesterday as I was riding my bike I came off of the end of the bike path which cuts behind this small city of ours and started up the road near Sebastiani winery, which is the road that leads up into the hills, my little exercise valley. I was comfortably peddling in the highest gear, which means I was going about as fast as my mountain bike can go on flat road but without seeming as if I was putting a lot of effort in. I wasn't trying to gain speed, only keeping my current pace. I was riding upright in a thin shirt, having just come off the path and onto the road. I gently steered my bike to go around a car that was parked on the side of the road. As I did, a woman turned to leave the car from the driver's side and looked up to see me and smiled. These things happen so quickly.

As her eyes met me and mine I nodded as I always do, to let her know that I see her and she need not worry. A bike traveling towards a person unexpectedly at high speeds, with a +200 pound rider, can startle or scare anybody and probably should. But I didn't seem to scare this woman at all.

Her response seemed anything but frightened.

I was able to get a quick smile in. Almost shy, bashful at the unexpected attention. It was flattering. Everybody should be flattered from time to time. Little magical compliments of approval.

These moments seem so odd to write about, as if only from vanity. It was partially about me, how it made me feel, but it might have been anybody and often enough is.

Some innocent mystery come to life, a tickle in the heart that circulates in the veins, little swimming smiles, the body's full beaming.

Afterwards, I had no memories of climbing the hill.