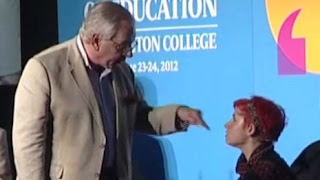 YouTube can be very difficult to watch. I just spent 30-40 minutes or so watching videos that include one of my favorite editorial journalists, Laurie Penny. They are all just brutal, the videos - she is denigrated, yelled at, has fingers pointed in her face, one man stands so close to her in a stance of obvious physical threat that it even made me uncomfortable, at home and knowingly well after the fact.

I like to live in a little fantasy world where ideas can be reasonably and even passionately discussed, where most people are willing to let others express theirs and then respond with their own. But female writers, some feminists in particular, have it very tough. I can't say that is makes me like her any more, but it makes me wish for her safety. I hope that doesn't sound too patriarchal. I would want her to be safe if I was a woman, also.

The English don't mind vehemently arguing things out in public. They seem to live for it, which I think is good, but you had better have your wits about you and your facts together if you're going to publicly debate them. She, Penny, seems to have achieved some notoriety as a radical feminist, so all of the expected online rape fantasies and death threats have of course followed, which I suppose is one way of knowing that you're hitting the right nerve. Or, that you're hitting the nerve.

To disagree with any aspect or claims of some groups, on almost any issue, seems to only make you an enemy. It places you in the most extreme opposition, a nearly criminal space to inhabit and one that you should certainly be ashamed of, because no idea has ever been improved or discarded through healthy discussion or debate. A man with an opinion on radical feminism... what a privileged patriarchal asshole...  Maybe.

Who does anybody think they are, really?

I should have recognized this long before voicing any of my own opinions, but I learn my social graces exclusively after the fact, if at all. It is not enough to only believe that women deserve equality of treatment and opportunity. You should also stay quiet when the radicals are making their most outrageous claims, or even some of their most accepted ones. Otherwise you risk losing everything, starting with your own agreed support for their most basic and decent premises.

A part of me wishes that all of America could go back to a time when things could be discussed, and even argued, without such extremes in polarity. The two-team approach seems to be lacking, unstable, dangerous, and very hostile to conversational understanding. I have fewer and fewer conservative friends, but I have been listening to some of them and they are not always wrong on every single subject.

I'm almost afraid to type that last sentence out. To even say it seems to make you "Pro-Trump." None of my conservative friends like Trump. I mean, not a single one of them. But to watch them disagree with a liberal on Facebook you'd never know it. Not only have we destroyed the moderate voice in American politics, both sides are targeting their own as being "too soft" on either this or that.

Instead of demanding principled politicians we've demanded stalwart ideological stormtroopers. Both sides seem almost as eager to weed out "traitors" from within as they are to defeat the other side. Not just defeat, to annihilate, forever. It can't be good, and no one seems able or willing to try to stop or slow the rolling juggernaut of political destruction.

We could use more Laurie Pennys in the conversation, not less. I hope that no one describes raping me for saying so. As imperfect as open discourse can be, can't we all just agree and expect that those sorts of threats be condemned and suspended by the platform on which they occur? We're trying to get to the bottom of Russian interference in our political process and we can't even prevent people from making death and rape threats to an impassioned and bright writer who has the temerity to expect to be treated equally.