One Way To Never Be 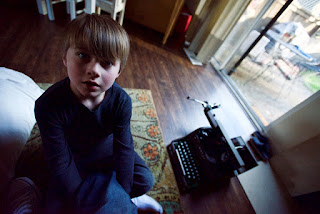 A lazy Saturday, I hope. I've run out of fuel for a number of things. A tenor ukulele arrives later today. Perhaps I'll muster the gusto to string it and play for a bit. I have become slightly obsessed with the boy's ukulele, but it is very small and hard for me to play, though I spend my time trying. I have good hands for picking potatoes, for harvesting buried roots as food, not so much for the delicacy of musicianship.

I bought a typewriter, an Olivetti, from the neighbor's garage sale when I was about fifteen or sixteen.  It sat in my room where I would practice writing, not terribly different from what I do here, though I was less able to hide the influence of the writers I was stealing from then.

I almost bought my first car from that same neighbor, but my father talked me out of it, and I never quite forgave him. He convinced me to buy a more sensible car. The one at the neighbor's house was from the mid 60s and cherry red. I have long since forgotten the make and model. It wasn't a muscle car, but it had American Classicana written all over it. My father convinced me that it would break down often and be hard or expensive to repair.

He was probably right, but that's no reason to forgive him. I learned my lesson, for a while anyway: Never let anybody talk you out of feeling cool.