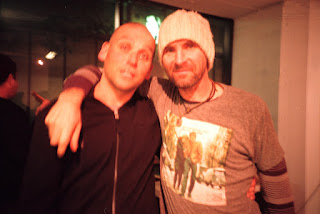 Last night, a dash into the city and back again, up past my bedtime, there was a going away party for a friend, another from SF now lost to wandering the wide world - Ireland, Italy, Germany, Turkey, and India were the places listed as the certain enough destinations, possibly others once the traveling unfolds itself. He was forced to give up his apartment of 20+ years here in SF, so rather than try to recreate his living situation he instead opted to amble the earth with a casual forward gait. Tilting at wind's will.

He's the friend that I have most associated with SF, and a big part of the reason why I moved here. As I was leaving he, James, gave me a brief speech about the importance of time spent enjoying life over things purchased and accumulated. I think he fears that I have lost a touch of my youthful wanderlust and now spend too much money on filmic frivolities. I probably have and probably do. There is always another lens wanted, a camera body, more, more, more.

Speaking of berries ripe and ripening, Cato is texting back the semi-salacious details of his nocturnal Berlin adventures. I show Mom the texts and she rolls her eyes and smirks knowingly. Sometimes it is easy enough to forget that the rest of the world does not live as we do here in the land of the free, the domain of the duped.

Mom and I will take the boy to the symphony today. There is a "family program" that includes music from Star Wars and other children's films. Perhaps afterwards I'll write a comparison piece on the music of Star Wars and Frozen, to demonstrate the effective use of the leitmotif on the minds of the undistracted defenseless.

When friends move away in batches there can be the questions: What now and what next? What does this mean? Who will bail me out of jail? I have the fewest friends in proximity to me than any time before. There is nowhere left to move to reverse that. I depend on people visiting. They sometimes do. I have begun negotiations on a possible 50th birthday party for myself, though I will give it some more thought after a nap.

Aging is a little bit like coming down from acid - things simply drift apart and float away. You tell yourself that it will all make more sense after some rest, that all will fall back towards its expected semblance after some needed sleep, but it doesn't. Everything becomes smaller or more distant, moving beyond reach in expanding oblong orbits. The universe of life's details unfolding just as you might expect them to.

You awake and have some coffee, read the news, make toast with butter or honey, look out the window and wonder to the world, what the hell is going on out there.