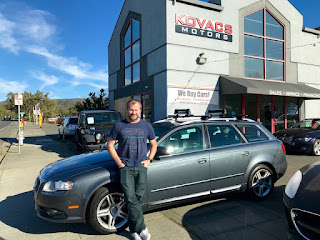 I bought a car yesterday. I needed one, badly. My old yellow VW Bug no longer went above 3rd gear. It was okay to drive around town, good for short trips to Taco Bell.... but could not go over 40-45mph for very long. The engine would rev higher and higher, but with no additional speed. It had other problems, also.

And yes, the above Audi is a total "dad car," but fuck it, I'm a dad.  What am I supposed to drive? They had a yellow Lamborghini for sale at this shop, but there was no way to install the booster seat, so I went with an Avant instead. Looking at the Lambo caused tingles in my bathing suit area, because I'm almost 50 years old and am very confused about how long youth should last under less than ideal conditions.

I can take some road trips now. It is an all-wheel drive, so Tahoe is within striking range. I feel like North Korea: I can hit pretty much anything on the west coast.

I just went in and covered my son with his blanket. I'm already beginning to miss his earliest years. He's turning into such a little boy. He'll be six in January, but there is so much that is changing now since his entry into Kindergarten. He seems to have more of a "stance" towards his being and persona. My interactions with him seem to be guided now by a quickly changing landscape of personality. He adopts the new and denounces the old so quickly that it is difficult to keep up. He's on to some new super hero that I've never even heard of and I'm still banging on about Thomas the Train.

It is all so cliched, of course, but they do grow up quickly. It passes like a dream, one in which you wish to return within that lucky glimpse of recaptured morning sleep. I imagine bringing a mason jar back with me and catching the essence of it a bit, to store for later. Pictures are good, but they lack much. He is so animated, it drives me crazy with joy, to see him figuring out how to be, and why. 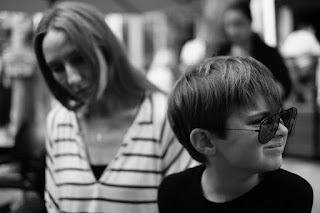 He wanted the yellow Lamborghini, and promised that he would learn how to drive if I would just buy it. For only $105,000.