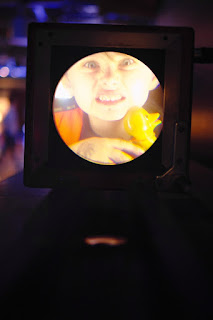 I am announcing my official retirement from nightclubbing. I tried to go out in SF on Saturday night. I was able to accomplish that part well enough, though during the landing and recovery I encountered some unexpected turbulence. It's all becoming a bit too much for me - spending time recuperating from self-inflicted damage that I insist is a vital type of fun. I suppose that's the realization that happens to many people at the end of their twenties. I'm trying to eek out a few more nights spent clubbing at the end of my forties. But the systems that sustain that sort of thing are shutting down one by one, betraying me.

The sudden and startling appearances of disturbing coincidences are becoming a bit too stark for me. Severe times call for severe measures.

Perhaps one day I'll tell a version of the details here, but for now I'm done with trying to hold onto a version of youth. I prefer sleep now to flashing lights, sound systems, and the accelerated joys of destroying synapses in bulk. Most all of the good things that happen to me now happen in the daytime.

A friend once confided a story from when he was growing up about his father, a memory that stuck with him. It was a painful thing to listen to, or to imagine. One of those situations where you can't quite extinguish the details of it from your mind, and the impact that it must have had on him. You think to yourself, Fuck... that's pretty bad. You tell yourself that there's a line and how happy you are that you're on one side of it and not the other. Then the line moves a little closer to you, you wonder just how close you'll let that line get before you back away from it. Not any closer at all is the correct answer.

It was one of those weekends - the inescapable realization that I'm in my last months of being in the upper portion of my forties. I suppose that it doesn't make sense to imply, that only makes it sound worse. Now is not the time for it.

I blame Daylight Savings Time. What a cruel and senseless thing to do to an already confused man of my age, or of any age.

I was able to pull some joy out of the weekend. It took a bit of limping and I was not quite my usual self, but I did it. Rachel, Rhys and I went to the Exploratorium on Pier 15. We wandered the rooms and played with the various exhibits and learned a little bit more about what it means to be alive and how our senses interact with the world around us. I thought it was cooler than a rave and required no recovery time at all.

In fact, we bought year passes to the place, we liked it that much. We haven't been since they moved buildings. It was good, healthy fun.

Rhys laughed and laughed at the many mysteries of science. Magnetism still amazes me, also. That an invisible force can attract and repel seems magical.

We bought the boy a multipart-outdoor-survival-device of sorts in the gift shop - a compass, binocular, mirrored piece of plastic that folds up in on itself for easy pocket storage. I presented it as a sort of spy device and he accepted this definition for it. The compass, of course, operating on the earth's natural magnetic field, a polarized piece of metal suspended in non-conductive mineral oil, or something along those lines. The plastic of the device functioning as the orienting baseplate. A marvel of the gift shop.

We watched the needle perpetually spin to point in the direction of magnetic north, so that we would know which direction was which. A very neat and natural gimmick. I hope we never have to use this thing to find our way, I thought.  Having a compass is one thing, needing to use it is quite another. 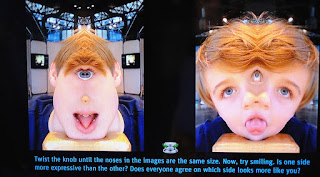