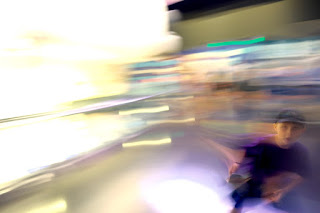 I began the long process of going through some of the pictures  - about half - that I took while last in Florida with the boy. My favorite so far (above) was mostly an accident. I had my iso set too low, so this exposure was about a quarter of a second because I was spot metering on the boy's shirt. What you can't determine in the image is that to the left, that yellowish/white blur, is the space shuttle Atlantis hanging at the Kennedy Space Center.

Florida's only theme park with a college degree.

Taking pictures of kids is difficult. Taking pictures of multiple kids is impossible. My normal ratio of pictures-taken to pictures-that-I-care-for is about 100 to 1. When multiple kids are involved I'm happy if there's 1 in 1000. I have no idea how film photographers used to do it. They were much better at predicting behavior than are digital photographers, and were far more patient. They're like the oldest spiders in existence. Any fool with a few thousand dollars can be a photographer now. Digital allows so much flexibility after the fact and very little need to economize on the number of shots taken, so success is almost guaranteed. Those factors combine to make people stupid and lazy, yet free to feel otherwise about it.

All of my camera gear approximates to what anybody with an iPhone shooting 8+ frames a second can accomplish eventually. Just keep shooting and you're going to get lucky.

It's the same basic attitude as a spree killer.

A slight exaggeration, but not very much. If you focus and exert some mental energy you can get a good image out of an iPhone at about the same ratio, and for much cheaper.

One day - that is what I will tell myself and desperately try to believe. I just bought a used macro lens this morning, mostly for use with my film camera and some black-and-white film. But you never know - sometimes you get the best results from your predictions being very wrong.

Ok, I have spent the last two hours going through pictures to send to my brother. Now, I have no energy left to write. Today is my only day off and we have considered driving to Sacramento. Because who doesn't want to go to Sacramento on Saturday?

If you don't believe me - that my son was part of the official Atlantis post-orbital mission - then the image below should settle all the questions, silence all the doubters.

If you look carefully then you can discern the effects of Florida weightlessness on a five year old. 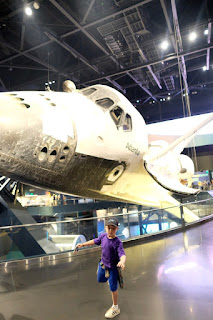