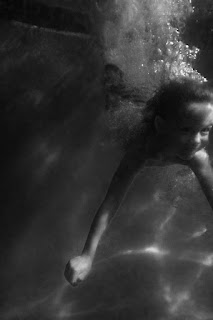 I found this picture on my memory card from the underwater camera that I took to Florida. It is my friends' son, Bastian. I love that name; it sounds almost Roman, is probably Latin-based.

I have been trying to "clean up" my memory cards. I just buy the biggest cards I can and shoot like a fashion photographer on cocaine, but then never find the time to go through and grab my favorite shots from them. Or, I only grab the ones that jump out at me and end up missing some of the subtleties. Or, sometimes losing memory sticks altogether.

If there was one thing that I could change about myself it might be this: organizational skills.

I have mixed admiration and a mild sense of detestation towards people who are organized, or those that have wonderful handwriting. Can one have mild detestation? I always assume that in private tidy people are secretly drowning kittens. I've preferred people that can hardly seem to keep themselves together - a set of walking, speaking contradictions, inherent fallacies of behavior.

I trust the beautiful and erratic as a kind of truth, over the methodical and perpetually composed as artifice. It's one reason why I tolerate drinkers - they forego some of the choice in this. They often make mistakes, if you haven't noticed. In this, their basic humanity puts itself on open display, not always pleasantly but it gives some witness to who they are.

People who never make mistakes frighten me, along with people who can neither accept an apology nor give one.

I can't say that I like Louis CK any more now, but I like the moral zealots writing about him much less.

Leave it to the intelligent mob to improve on the mistakes of the dumb one.

They're so sure to get it all right this time.