A Memoriam For Another's Life 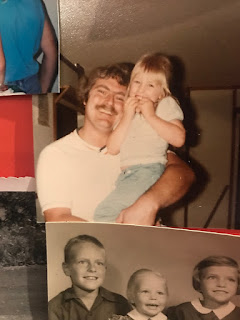 The memorial was what one would expect. It is of course sad when someone passes away, that is the common feeling that we all must endure. Rachel is a grown woman, but it was still her daddy that passed away. It was impossible not to remember the sound of her voice when talking to him on the phone. The excitement with which she would relay the various goings on in her life, the wanting for him to know, to participate by proxy just by listening to her delighted retellings, the tremendous sorrow of that vacancy now.

It began snowing just as the service started. Preston hated snow and would have gotten quite a laugh out of the unintended coincidence of it. He moved to LA and lived there with his family from '79 onwards - Rachel, just a baby girl.

The woman conducting the service asked if anybody would like to say anything and to our surprise Rhys stood up and walked to the front of the podium and gave a few words about his grandpa - that he loved him very much and would miss him, that he made him laugh, and would always keep him in his heart. My heart nearly burst. I was so proud of his composure and willingness to express. Normal parental feelings, I suppose, but these feelings are mine. I get to have and keep them.

Rachel's speech exceeded my emotion threshold. Her tears became mine also. She relayed what a good father he was - always looking out for her, often catching her in adolescent wrongdoing, ever prepared to save her from herself whenever possible, always there for her.

I don't know how others experience the feeling of being alone in the universe. When my father passed away it is a sense that arrived slowly and has never left - that I was now more alone than before. My life is one of the things that helps prevent my son from having to feel those feelings yet. Or, that is the hope of loving, anyway - that giving yours somehow helps others, and that doing so helps you in return. Love being its own reward.

Since having a son I have felt less loneliness, meandered less along the contours of its familiar desolate sharpness. Now I feel solitude more than loneliness, and that is not the same thing at all.

Loneliness is the life killer. Nothing has brought me to oblivion more regularly nor more reliably. Its avoidance explaining in part the trajectory of my early years. I miss being surrounded by people I knew and loved in a nightclub, the warmth of loving others openly, without expectations for that love. Who might have ever guessed that one can avoid the sadness of spiritual solitariness in the most unexpected of places, one such as that. Some are disoriented there, others miraculously able to find themselves.

Last night a young woman wrote me that she had read about my "retirement from clubbing," and that she was envious of it. I didn't quite know how to express to her that I would trade with her in that instant if I could. To be able to again submerge myself happily in the exuberance of that life, the ecstasy of musical communion with friends, the simplest joys of just being there.

Well, the emptiness is endless, cold as the clay
You can always come back, but you can't come back all the way
Only one thing that I did wrong
Stayed in Mississippi a day too long