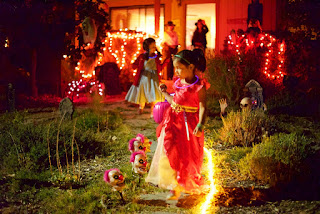 I wrote a gruesome political screed, but thankfully sat on it for the better seconds of the morning, thinking that I might go back and do a second draft to publish it, then couldn't bring myself to read it a second time.

The above picture is my favorite of the ones that I took on Halloween night - Stella, the princess. It is difficult and frustrating - photography in the darkness of night. The digital graininess is not the kind that I like - I greatly prefer that of film - but it is passable I suppose, once you can get the camera to focus. I could buy a newer camera body. Why? I've spent enough already and so rarely go out at night any more, and have little use for a camera of this kind when I do.

What can a working man do.

What can anyone do, fuck work. We're each and all doomed - the oppressed, the empowered, and the powerful - everything changes, atoms don't die.

Okay - damage it all; damage it is. I'll copy and paste the draft here. Once I pointed out to myself that I am a working man then I no longer wanted any of my time to be wasted.

Who knows which errant sentence will one day propel my name to infamy, or perhaps something even worse than being known for foul speech.

Why I Enjoy Killing Two Birds With One Stone:

At what point did everyone agree that killing two birds with a single stone was better than killing one in the same way? Who the fuck kills birds with rocks? Was that what people did before television? No wonder we're all so fucked up. America is a nation of folksy killers.

Bad things probably happened in the 90s, but I didn't care, mostly. I was young and having fun. Since Trump won the two-team American lottery I have been forced to wrestle with genuine middle aged emotions for the first time. I mean to say that I am wrestling with those emotions somewhat differently than I have always wrestled with all of my other emotions. I am not, and never have been, known for being very stable. I'm reliable, but that is different.

It seems clear enough to me that, short of impeachment or nuclear war, Trump will win again in 2020. The writing's on the wall, and the message was written by the right hand of America. You can determine this not so much by the magnitude of his many disgraces but rather by the unchanged temperature in tone of what may as well be called The American Left. One would think that the recent revelations of Donna Brazile concerning the DNC and its predictably unethical relationship with Hillary would be enough to stir some well-practiced and righteous liberal indignation, but I doubt it. They cling to her for reasons I either don't understand or worse: for reasons that I do. They tried to win a national election with the rallying cry of, She deserves this!

The Trump supporters possessed the more compelling argument - a simple, Fuck You!

The liberal version of that same message, evinced in the fuck-you haircuts and hanging on the many faces of the dispossessed, no longer seems like the more compelling position. The left's perpetual and puny fuck you, greedy assholes! has lost its gravitas and momentum. It's unfortunate, but Trumpalism appears to be taking hold. So, Go Greed!

Sure, the left can post studies on Facebook all day long about how the political phenomenon is based in racial fears and that gun owners are more likely to own guns, but who gives a shit. The left has lost their persuasiveness and it is not Hillary Clinton's fault. The American Left doesn't rally people very well any more, and when someone does we accept his being cheated him out of the nomination.

As much as Equality For Everybody! is the far more noble argument, Fuck You, Tranny Faggots! seems to be winning more hearts and minds.

Liberals can't seem to discover who they want to disagree with next, but they sure as fuck know it as soon as someone speaks. They have created this weird semi-sphere in which they seek each other's approval for how they're talking about various issues, who should be allowed to speak on other issues, and whose speech is deemed as hateful next. It really is okay to punch Nazis seems to be the only coherent liberal message communicated in the last 9 months. They are always against bad things and always for good things. Have you ever noticed that? They ceased believing in personal freedoms and instead took up the career of freelance micro-prosecutors. They claim to believe in freedom of speech but they possess a mitigated sense of selective tolerance for its more practical applications. When I was a young liberal... Nazis were allowed to speak, we just ignored them and made sure that what we were saying was more interesting. That approach doesn't seem to resonate nearly as well as, Shut the Fuck Up, Pussy.

That is what the new America wants to make very clear: Shut the fuck up, pussies.

It's not a very nuanced argument but few can argue with its recent effectiveness and popularity. Hopefully somebody will be able to tell me if the phrase is more sexist or homophobic, and precisely why. I really count on social media for this type of granularity in bigotry detection. They are the leading experts. You can't keep silencing people, or attempting to, and think that those people aren't eventually going to Make Great American Noise Again. These are people who believe their lineage includes pioneers. And perhaps yes, some pioneering slave owners. The same people who use the phrase "The Failed War On Poverty" never stop to consider the more relevant and successful war against equality.

So, we get the abbreviated version: Shut-up, pussies.

I'm not arguing for that stripe of stupidity here, just noting how American liberalism has reduced its scope to micro-corrections for micro-aggressions. If you perceive something, persecute somebody. They have wanted to expand the authority of their local HR office to all aspects of life. So, now we're seeing the reactive effects of years of that. We're like dogs chasing Trump's laser beam down the hallway barking at its inexplicable wrongness. The most cynical and sinister on the other side are laughing along, even though they seem nervous about it. Not so nervous as to fight back against it, but similar to self-described liberals who ignored Obama's escalation of drone attacks against American citizens without trial.

Being mildly cruel to a dog with a rave laser. That seems okay for now, right?

Who can blame them, really. The two-sided political monster that is American politics has done little but laugh and accuse one another every eight years since the end of the 70s. Since 1981, the presidency has basically flopped back and forth lazily between the two parties, if you can ignore the failure that was and is George Bush Sr.

That many are now heralding George Bush Jr. as a reasonable and well spoken advocate of American values should give frightful pause to anyone. But no. If they can buy that baked bullshit then you know they're not going to have a problem swallowing another endless stream of Caca Clinton Cupcakes. We know that Bernie was rallying the American left in a way that Hillary could not and did not. Then she flaunted her disdain for them once she won the nomination, as if she had a personal grudge with anyone that would challenge her entitlements. I thought Bernie had about as much chance of winning a national election as did Santa Claus, but that now sounds like the same familiar truism and prediction that landed us here. The Grinch won, and it was a winner take all competition. Desperate times call for fair elections. Bernie and Trump were rallying people, and that's what wins elections. America seems destined to never learn that people will come out to vote for a candidate, not nearly as much to vote against.

This is the key to Trump's strategy - the very simple how and why of 2020. The Dems have no one to rally behind. And kids, this is precisely how you kill birds with stones.

After the last election, when we were all falling freely in this newly confusing vacuum, the one thing that I kept asking myself was why half of American women would ever vote for Trump. It made no sense to me at all, that women would betray their own interests in this way. But then I talked to a few of them, I mean actual republican women, and I was surprised at how much their suspicions of the democratic party mirrored my own. I didn't buy the Hillary lie, that she was fighting for women. The women I spoke with wanted prosperity and they would find their own piece of it. They just didn't buy the bullshit about how Hillary was going to fight for them. They saw her as the

The same people that have blamed Ralph Nader for the successful dynastic nepotism of the Bush regime seem to be simply gleeful about the idea of Melania 2020. Really? Clinton redux failed, somehow Who else have we got? became good enough.

What the absolute fuck....

I don't have a conclusion here. This is a run-on argument I've been having with myself for a while now. My sensibilities are still very much liberal, but not what passes for liberal now. I prefer the liberalism of the past, when the idea was that you didn't have to agree with what someone was saying to permit it. Liberalism died when it became the presumed arbiter of what is allowed.

I'm not one for killing birds, of course, but I'd guess the onset of liberal death began at approximately March 21, 2006.

True, she hasn’t told a lie as tidy as Spicer’s ludicrousness about Donald Trump’s inauguration crowds. But her briefings are breathtaking — certainly this week’s were. For some 20 minutes every afternoon, down is up, paralysis is progress, enmity is harmony, stupid is smart, villain is victim, disgrace is honor, plutocracy is populism and Hillary Clinton colluded with Russia if anyone would summon the nerve to investigate her (because, you know, that never, ever happens). I watch and listen with sheer awe.

With despair, too, because Sanders doesn’t draw nearly the censure or ridicule that Spicer did, and the reason isn’t her. It’s us. More precisely, it’s what Trump and his presidency have done to us. Little more than nine months in, we’ve surrendered any expectation of honesty. We’re inured. - Frank Bruni, New York Times