Periods of creativity and poor judgement 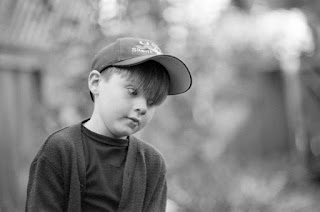 I fell asleep at 5:30pm yesterday, woke at 12:30am. Ooops. I stayed in bed and tried to coax myself back to sleep. Every now and then it works... not this time. So, now I sit here at 3:30am writing a post, waiting to drive into the city in the rain, only to return again and be tremendously tired by later this afternoon. I used to have much more resilience, more fortitude against perpetual wakefulness. But that all goes the way of the Dodo. Extinguished by the decades.

I spend way too much time in a room all by myself, sitting at my kitchen table in front of the employment portal. It creates a vacuum of interaction. Or rather, a vacuum from interaction. It fucks with my mind. People need to converse, I think. I do, anyway. I get less and less of it as each year passes. I would use the word depressing to describe it, but I reserve that root word for the actual state of depression, or try to.

I've hinted at it before, but I don't believe that I've ever talked about it openly here: I was once diagnosed as bipolar, though I prefer the term manic-depressive as it describes the fluctuating states with greater precision. Polarity hints at a positive and negative magnetic charge, neither of which is entirely true, though there can be a marked dichotomy to the orientation of each state and its results. My sleep patterns often determine or predict which state I might be heading towards, though it is not always easy for me to predict. Self-medication is common among people like myself, though increasingly ineffective as I get older. Exercise helps, of course, but that is more of a way of forcing my body into exhaustion. It is, in a sense, self-medication prior to the arrival of an unwanted state of being. Diet also, and moderation of intake, all combine to stay or topple my towering or sunken spirits.

Beyond that, there is not much that can be done. I tried the medications: fuck them. They bring nearly as much damage as does the affliction. If that's the cure then I'll take the sickness, as I'm so fond of saying. Lethargy is the common result of a depressed state, and that's what I've been struggling with now for a few weeks. I can hardly move, even when I am exercising. A gray, wet rug sits on top of most everything that I do, above that even grayer skies, above that gray stars.

The hypomanic state is no better, though at its onset it feels like a very pleasant drug. I become enthusiastic and animated, charming even. Only those who have known me for a while recognize it, or can tell when I have escaped its thrill and am no longer making entirely coherent connections. Rachel and I recognized that wild upswing around mid October, so now the slide into what always feels like perpetual winter. I have a very mild form of it, so it is easy to tell myself almost whatever I choose, then to act on those beliefs. I have not been entirely systematic in my understanding of its effects, nor of my efforts towards self-care.

A relatively recent doctor's assessment was that an accurate diagnosis can not be made while I continue to self-medicate, and he was probably right. He did not believe that I suffer manic depression at all, but that I am only a bright and enthusiastic thinker, given to occasional fits of melancholy and gloom. A common condition for many, he said, but not necessarily a disease.

I believe he called me Irish - subject to desolation and song.

Perhaps he is right. I mean, about the misdiagnosis. My NY doctor was a psychopharmacologist, so he insisted that medication was the only treatment that can be offered. I spent a couple years trying that. The attempts and the recovery from those attempts were among the worst years of my life, but I did myself few favors then, either. I had hoped dearly that victories in chemistry would help counter-balance my many recreations, and that I would never have to be held responsible again. Instead, they combined in my system and left me confused and frustrated, unwilling to move for weeks.

I remember Mitch Hedberg saying, Alcoholism is the only disease that you can get yelled at for having. It's not true. Manic-depression is similar if not precisely the same, though it is often partnered with drinking or worse. Efforts to treat a condition which greatly affect your emotional states are very difficult for observers to understand, especially if the afflicted possesses any intelligence. People assume that there is a corollary, if not causality, between intelligence and behavior, or the emotions which feed behavior. There isn't. Managing other people's emotions is the unluckiest pastime for the friendly-minded, though there is rarely a shortage of people willing to try. Being better is always simple and easy for the others.

Having a child helps. It rudders the spirits a bit.

I wasn't sure what I was going to write about this morning, I rarely am. But I had not expected this post to appear before me. I am almost nervous to post it, but that goes against the disposition of this site. It would be an insult to free expression. If silence is a cure, I'll stick with the sickness.