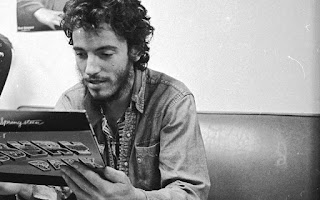 I'm reading Springsteen's autobiography, though I had promised myself not long ago: Never Again... After reading Keith Richards' Life I told myself that I need not spend any more time reading rock biographies, particularly after suffering the 40 year axe that Richards had to grind against Jagger in his book. Forty years of any one thing is enough for a lifetime, is what I told myself, but I was of course wrong.

I should probably not read any more rock biographies. It makes me like the music less, to know all of their little historical faults. Bowie, The Clash, McCartney, a few others - they all leave me not liking the artists much. Most all of them turned out to be such assholes. If I am going to read about rock then I prefer reading writers who write about it, not the artists telling their aggrandized self-stories.

It should not have surprised me, and it definitely should not have angered me the way it did a bit, but Springsteen can tell a story and is a reasonably good writer, able to turn phrases and twist them. It doesn't seem fair that someone should have multiple talents, particularly ones that I want.

The book has had me reliving some of my childhood experiences, thinking back to when I first heard these albums at the insistence of one of my childhood friends. I only liked a few songs here and there until I heard Nebraska. After that I changed, I was a genuine fan. It's really too bad, what they let Springsteen do to his songs in the studio. He's like Elvis Costello with his music, he insists on ruining most of it with overproduction. They are almost all better in a different form.

Reading about his experiences with his father are tough. You see the image of a boy and then a young man who wanted his father's love, but instead grew to hate him and his drinking, then to regret that hatred. That is just one small part of the telling, a partial explanation for the near religious-like yearning in his music. It has stuck with me. I wonder if my own family life was fucked up, or not fucked up enough.

His descriptions of his father's behavior explain in part Springsteen's off-putting sobriety and spiritual clear-headedness. You can't exactly or easily fault him for it, but paired with his self-righteousness, well, it can be a bit much at times. The Boss can seem like a Bono that made it out the other side of addiction and is now as smiling and happy as Tony Robbins. There's something very sickening about it all. It doesn't seem fair that he used rock and roll as a vehicle to drive to the heights of such personal health and well being.

Do your pushups somewhere else, man.

Well, I am up to the point where Columbia refused to promote The Wild, the Innocent & the E Street Shuffle. He was at the infamously hackneyed turning point. He needed to write a hit, so of course Born to Run appears next. I might have to skip that and go to the Nebraska chapter, then stop altogether but tell everybody I read the rest. That seems a bit weird, though, to tell people that I read a book only after a certain chapter. Maybe I shouldn't bring it up at all, not invite any questions about the extent to which I did or didn't read the book.

I've been writing here a lot and not publishing the posts, stuff like the ending of the paragraph above, where I start to pretend to think out loud within the writing, and maybe I am, though I believe that I'm just kidding, but it doesn't make any sense. None of it. We live in such uncertain times. Something terrible has been unleashed inside of America and it's not law and order.

Got a wife in kids in Baltimore, Jack
I went out for a ride and I never went back
Like a river that don't know where it's flowing
I took a wrong turn and I just kept going