Squeaky Fromme was from the future 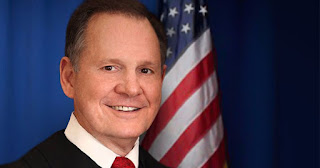 There is so much bad writing out there, much of it only an appeal to morality, a thing that is nearly always presented as objective fact.

That's the one thing that I do love about Alabama right now: they are staring people in the face on television and asking the difficult questions. Like, What exactly is wrong with having sex with youngsters? I mean sure, it's illegal but so aren't abortions. They know in their hearts not to trust any code that would claim that as a legal truth. They have their own codes down there and they're going to stick by them. You can't try to shame a man that installed the Mighty Ten Commandments at his court house with a silly little thing like sex, especially sex that gets tacit approval in some parts of the bible.

What the fuck do liberals even think any more? No matter how many times they get their asses kicked with this stuff they still come back with the same pre-defeated arguments. Will they never learn? If they would have just ignored the illegality of the accusations and focused on the fact that Moore never married any of his accusers then they'd be swimming in giggles by now.

And let me get this straight... Someone was preying upon America's youth at the mall, and they didn't own a corporation? You see, Alabama still has faith in its entrepreneurs, small business owners, and youth enthusiasts. They're just wanting to get out from under all these governmental regulations. This must be a state's rights issue.

What an exciting time to be alive. I always knew that one day the American Inquisition would come along and wash these streets clean. I can't be the only one that reads Slate and hears the echoes of Travis Bickle in most all of it. People are becoming a little unhinged lately in their efforts to defend or impress Jodie Foster. It really is just like the 80s. Soon enough a Jane Hinkley Jr. is going to try to do something to fix it. It all makes sense now: Squeaky Fromme was so right.

I followed girls around the mall in the 80s also. I thought that's what you were supposed to do. How else are you going to meet them and introduce them to your best friend, Jesus? You don't just walk up and offer to buy a girl some Orange Julius, you have to let them know that you're stalking them a bit first. I'm not talking about those skanks that hung around at the game room. I mean out in the open walkways, plazas, and of course the food court, where the nice girls roam. My God, they looked so soft and sweet, as if they each tasted of cotton candy.

Now, the mall is structured much like one of those fancy new cathedrals, so perhaps he became confused and honestly believed that he was doing God's work. Nobody has yet to claim that he wasn't a man of the judicious cloth.

I don't know, I'm not an expert in these matters the way that others are now. So many good minds are becoming Christians without Christ. They're so eager to insist upon the moral supremacy of their arguments that they have become as humorless as the sinners they're busy reforming. If you notice, everyone has become increasingly comfortable with using the word "evil." That's always one to keep your ears tuned for. It never means good things for anybody. They're sending in the urban missionaries now, to inform all of creation about the good news and loving forgiveness of living deep in the bosom of a blue state.

There are four things that I'd like to see happen, in this order:
The outcome of the trial is meaningless, but a conviction and prison sentence are preferable, as that would help the civil suits that will follow.

All that I ask of any of this stuff is that it becomes more entertaining for me. What could possibly be better than an accused pederast to be hoisted into office by the Alabama electorate of the religious right. You can not win a moral argument with these people. Trust me on this, they function on a different ethical plane than most of you. All of you, in fact, if you're reading this. They know that liberals smirk at Jesus. Do you think that trying to fuck teenagers even comes close to that on their moral scale of wrongdoing? Their biggest regret seems to be not having lived during the biblical flood.

The senate seat that Moore is campaigning for is the one that was vacated by Jeff Sessions. Do you believe that the same voters who let that perverted little soul-stealing hobgoblin represent them are going to have a moral tussle with someone whose only crime was liking the pretty girls he saw?

Calling him a racist isn't going to work, either. That has been proven with recurring certainty in those lands already. The claim should be that he was trying to tell these young girls about Charles Darwin.

He was naturally selecting them for some Satan science.