The storm is threatening' 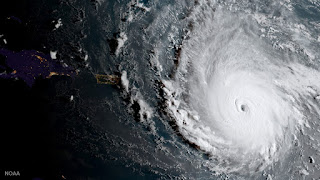 It's hypnotic to watch - the storm moving across the waters, watched from above. The safety, of course, the convenience. Also the abstraction of terror, lust, the matched fascination with both. People wish to participate in things, perhaps those things. It is a perfect event for compassion, afterwards. A maelstrom menacing the traces. You stare through the clouds, if you can, looking for the lines below that separate state from sea. Tracking the black contours along the curving surface.

I remember being at the beach in Florida, maybe two handfuls of years ago or more. It was at our friends' house. They had a beautiful place on the thinnest southern portion of Siesta Key, facing the Gulf. A few people were there while they were gone, so it was up to us to prepare for it, wait it out, which we did. I remember sitting in the dark, listening to the wind blow against the boards we had put up on the windows. Everything held, though there were moments when it did not seem possible that it would. We did not get the full force of the thing.

When I was a child we would have those eery days that preceded the landfall of a tropical storm and worse. I think it was waiting for the arrival of Dennis, I stood out in the street as the clouds rippled and rolled above. The local radio station - I want to say it was WDIZ 100.3 -  uncharacteristically played Queen's "Another One Bites the Dust."

The phrase "Something Wicked This Way Comes" kept repeating in my young mind.

The storm fizzled out. I share the sinking feeling that this one will not. I hadn't started to worry until I wrote this.