Google searches after one bottle of wine 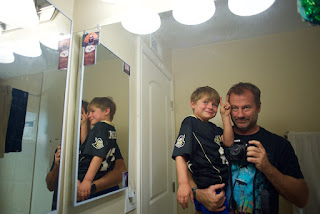 Well, I needed a new kitchen table, now I have one with four matching chairs. It was Rachel's father's table. He had just bought it. So up to Sonoma it came with us in the car. I can't wait to have a dinner at my place.

Today we will bring the boy to breakfast and tell him about his grandfather. I'm not quite sure what to expect. There is no way of knowing what a child's reaction to such news will be. I have pondered whether or not we tell him about the process of cremation if he asks. What effect would such a thing have on the mind of a five year old. How long will it take him to apply any new knowledge he gains to myself and his mother. I suppose these are the things that we will find out. Or perhaps more troubling is the idea that we'll never quite know what the result will be.

It seems that the simplest question, Where is grandpa now? will either lead to some nonsense about heaven, a place where puppies play and bark all day long, a place where there is no pain and where a person's spirit is no longer attached to their body.... or it will end in a technical description of how we rid ourselves of the burden of the bodies of the dead.

It's easy son, we reduce their once substantial self into a very fine dust. Oh sure, it's right here, have a look. Be careful, don't spill that, that's grandpa now.

Something doesn't feel quite right about that explanation, for a five year old. I'm certain there are websites designed to assist with this process, but I can never read through those types of sites. Invariably, by the third paragraph they have written something that makes me question their authority on death.

I suppose I could just sit quietly and watch mom handle this. Afterwards, I could explain to the boy that mom is mostly full of shit, grandpa was abducted by aliens and she knows it.

There are a handful of directions this thing could go today and I'm not entirely sure that I trust myself with this potentially fascinating responsibility. Why do I always have to be the one who does and says the right thing? I've never shown any signs of maturity and still people look at me as if I should magically possess it as a quality.

For this reason alone I am against the basic principles of democracy. People have no idea what the fuck they're doing. The certain ones are clearly wrong.

It is a record breaking heat wave here in the Bay Area lately. It was 107 degrees yesterday. We all went to see a movie just to enjoy the cool dark of the theater. When I came home I watched Mulholland Drive and Stroszek while enjoying a delicious bottle of Cabernet Sauvignon, a Joel Gott. I sat on my new couch and enjoyed the feeling of my changed living space. I was texting like a teenager with my old buddy who also loves film. It was nice just to feel that I could watch an entire movie by myself. Time passed as a luxury.

While I was watching these films - both of which I had seen before so the obligation of studying and understanding them as a student was somewhat lifted - I was also browsing Facebook and Twitter and  it occurred to me that without my group of friends then that nurse in Utah might be in some pretty serious trouble. Luckily, a bunch of people posted about it which should help the laws that are already in place come into effect. Everywhere there is injustice and a growing distrust of the process to correct it.

It occurred to me that people believe in conspiracies, at least in part, because that would mean that someone must be conspiring against them, which is perhaps easier than is facing the reality that living a mostly anonymous life is both meaningless and futile.

Quite literally, belief in a conspiracy is a way of publicly stating, "I am worth deceiving." It is the near socio-political equivalent of an infidelity. It's similar to claiming that mysterious people that you've never met are cheating on you.

Someone who cares enough to do so is betraying me.

One must first assert there is someone who values lying to them, then that the lie itself has some value. So it follows that the lie must also be big, commensurate with a person's social stature. They then impose this value on you in the form of a conspiracy that they are magically intelligent enough to be privy to. Yet they'll direct you to informational sources that are freely available and just as easily debunked. You will be met with confusion and consternation that you do not also embrace the full revelation of the secret plot against you.

In the future everyone will have their own conspiracy. It will be crafted from your metadata.

It is very difficult for some people to accept that an admission of the boring and much more likely truth renders them less valuable. Without the existence of an exploit then the individual describing the conspiracy shrinks in value. Making oneself a target is the goal. The subscribers to conspiracies are attempting to transmute their own suspicions and lack of faith into an important conversational commodity.

This realization came quite easy, you see. I was watching Mulholland Drive, which has the narrative structure of a conspiracy. You are given just enough information to be certain that something malevolent is going on but never enough to draw any conclusions from those facts or that feeling.

Don't worry, I didn't spend the entire night intellectualizing my cinematic experience. I was also doing Google searches for Why do people poop in the morning?