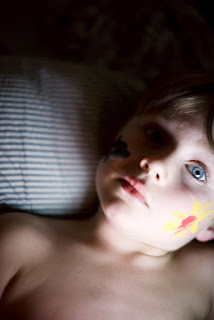 I almost started explaining to my son last night that there are starving kids in the world that would just love to eat his dinner, but no, I stopped myself before the words formed. He is arriving at the age where he is beginning to test the differences between must-do, might-do, and not-a-chance. I'm not sure how effective the punishment/reward system is on a  five year old, especially when I am using ice cream as both - he either gets some or he doesn't.

Is that how it works? I may need to expand my parenting beyond the bargaining stage. Who knows. I'm beginning to suspect that good parenting is a myth that only comes to life in magazines. The more I think about it the more misty the concept becomes. Being a disciplinarian doesn't seem to work, but the boy does struggle when we attempt the laissez-faire model. What is the opposite of non-intervention? Somewhere along the way I may have forgotten to adopt a parenting strategy.

Okay, before the day begins I sit here, waiting in the dark as the sun appears, a 200 pound cat purring without fur.