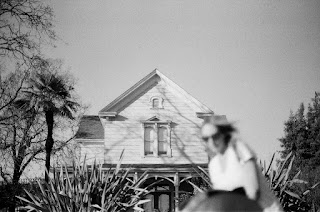 I sometimes feel silly going through old pictures, almost ashamed. The past can be a mildly dangerous and intoxicating place. It can also be unexpectedly sobering, pictures can be. Maybe a danger in other ways. There is an occasional feeling of guilt there, in that it's almost nostalgia, without the pleasures of longing, where sentiment always turns or softens. All of it odd, the feelings of wistful uncertainty. So much from the past is paradoxical, some of it busy with taking over the future in its aggregate form. All of it becoming aged together, a panorama of blurred curiosities.

This image above was a mistake. I was trying to do a quick shoot with Rachel in front of a local restaurant and I was hoping to emulate Grant Wood's "American Gothic" on the fly, but had neither a tripod nor pitchfork with which to complete the scene. Rachel and I had just had baby boy wonder, Rhys, and were out pushing a stroller around the neighborhood.

Don't read anything into what I have written here. I chose the picture above because it did not represent the feelings I attempted to describe, not as example of them.

A bit of aging, dusting the room for sorcery. 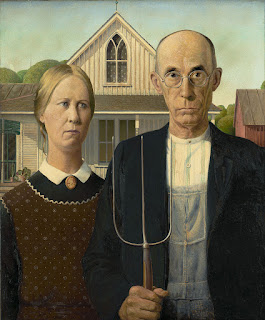