How histories are made 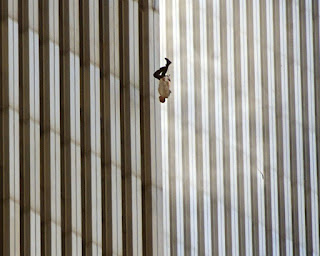 "How often have I lain beneath rain on a strange roof thinking of home." - Faulkner, As I Lay Dying

I was chatting with an expatriate friend. We were commenting on the twenty years that we've known each other. She pointed out that it actually does feel like twenty years, an oddity for that type of time passed. When I think of other relationships I marvel at time's oddness within them. Events seems further distant or heartbreakingly close when felt through the curved corridors of the mind.

Our friendship seems as if it's lasted about twenty years, though. It's very no-nonsense, you see. Or rather, post-nonsense might be a better description.

She lived in my apartment in NYC on September 11th, but that is not what I meant.

I was with Rachel on the afternoon of September 11th, when we got the news. We were in Manchester, so it was shortly after we had arrived at the studio and lunch. We were already playing around with loops and riffs and stabs and samples, having finished the basis of what became this track. Coincidentally, it is one of the few "fun" tracks I have ever produced.

British Airways lost my passport shortly after that. I stayed in England while my studio partners flew off to do a gig in Japan a few days after. It was a surreal experience, and I'm no stranger to those. There was a time when my entire life seemed surreal. Though being out of my country with an airline having lost my passport added to the weirdness.

What did Villon write:

In my own country I am in a far off land.
I am strong but have no power.
I win all yet remain a loser.
At break of day I say goodnight.
When I lie down I have a great fear of falling.

I was, at least, with another expatriate - Rachel. The days and nights passed so strangely, waking each morning with new and unfamiliar fears. We talked a lot during those two weeks. The world we knew spun up and away from us, even as it spun around us.

She and I drove down to Chester, over the border into Wales. This is why Rhys' name is what it is, Welsh in origin though my heritage is Irish. I found the use of the y as the name's only vowel to be poetic in a way that I liked. The cities named or ending in "chester" in England indicate that a Roman fort had once occupied those cities, though most of the Romans are long gone now, at least from industrial Manchester. They all went back to Rome in the 5th century, handing the island back to the barbarians who were so willing to fight for it.

I wonder how they all turned out.

I have nothing to say, really, neither grand nor sweeping opinion on September 11th, and I'll generally avoid, taunt, or encourage those that do. The event seems to have had a galvanizing effect on some, but towards what precisely it is hard to say. Patriotism, maybe. Nationalism, more likely. Then there are others who enjoy the passions of doubt about the events of the day. What can be said to them? Of course there is reason to be suspicious. It's how we know the government is on to us.

I like the image above. It is known as "The Falling Man." I don't like what I see so much, but rather like the power that it has. Of the many things to have come out of that day and all that followed the image has contained both a visceral effect and an intellectual interest within me. I see and feel and think a number of things in it. I almost bought a print when I lived in the East Village. There was a storefront set up to sell them to raise money for charity to help the responders. This one was there for a while, but then it disappeared when I went back in, the partial story of which is told in the link provided above.

I never bought it because it is not an image that you would hang anywhere, not if you cared about your own feelings regarding where you live. Its power is that of a bad magic, also. But I wanted to be able to look at it anyway. The print was much better than is any online version. Standing in front of it is not like looking at it on your screen at all. It becomes less transitory, the fleeting death and life captured become more material. People want certainty. Caprice in too many things is discomfiting, disquieting, even impossible. A print of an image is its assuredness of itself.

I just read in the article that the most accurate number of jumpers that day was approximately two hundred, culled from eyewitness accounts and forensic evidence.

That grim certainty has made me not want to write any more this morning.