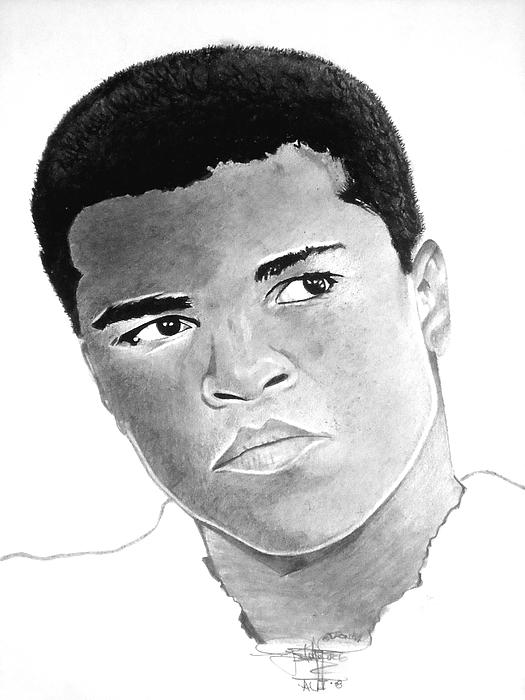 (The fighter, Muhammad by Ali Keeyonardo)

Even my most enthusiastic supporters were reluctant to show advocacy for my exploration in Bat-Boner yesterday. I have accomplished something, though I'm not quite sure what. A puerile victory, or perhaps a personal tie, a record-breaker with something unnamed. A draw in the darkness.

I lost the coin toss, so I had to make it up in goals.


I have bored of writing daily, I think. Though I feel empty if I don't do it, incomplete. It is a form of compulsion. I am certain of it. It can be cathartic, but it often ends up being merely the result of unspoken urge, habit. It no longer gives me the sensation that it once did, unless I take some time away from it and then go back. I must seem paralyzed, to an onlooker, never able to surprise myself with my own movements.

I suppose that I am not meant to complain about those feelings, here. What if it makes somebody else feel bad for reading this. That is not my intention, at all.

Jesus. I need Jesus, or Moses, or maybe a floating Noah. Unnamed Lot's wife, before the mishap, just at the moment of her curiosity, then for a few brief moments before salt. Women should really never look back at the burning valley of Sodom. It is pillared.

Ezekiel was a colorful character. Why aren't we encouraged to worship the prophets, especially the mute ones. Wasn't Mohammad a prophet? I have a drawing I did of him lying around here somewhere. Just a little sketch, to capture all moments, forever.

Let's if you can find it there in my pockets, my Muslimah.


That's my problem with writing, I think. It's that I no longer believe very much of what I write. For a few months now, maybe years, I have fluctuated back and forth between things I care about and things I don't; things I believe and things that I forget.

Perhaps I should start writing children's poetry like old what's his name. I can't think of who I am trying to think of. James Baldwin? No, somebody else. CS, who did you say that I would soon become?


A piece of advice for my music loving friends: Do not awake in the middle of the night and begin to read about Nick Drake's final years. That's what I did, early this morning. I put on Bryter Later because it happened to be queued up in my iTunes library. The pleasure of listening gave way to the sinister itch of curiosity. Is anything more devious than wonder?

Now, I'm ponderous, melancholic. I wish to augment this feeling, or somehow remove myself from it. It has taken few of my years to realize that wish is (mostly) all that drugs and alcohol do. I read it long ago in my first pamphlet. It was how my parents spoke to me, though brochures for a hopeful, better life.

Add To or Remove From. That is my sole wisdom, my sinister logic. Anybody that wishes to be more present, and in the moment, is... well, doomed to the present tense.

No, I kid, drugs, and sometimes even alcohol, do allow you to live in the moment more fully, youngsters.

Carpe Dilaudid, when you can.

I don't remember all that much about Ezekiel. Well, just listen to me, now... I never even really met the guy! I only recall that he struck me as quite crazy, possessing a stern and inflexible disposition, like so many Old Desert Testamenters.

I had the oddest impulse to add the word "parfait" to that last paragraph and I have no idea why. Now that, true believers, is the source of all prophecy: received wisdom.

Don't question it if it's absurd, beneficial, or directly from God; only question it if may be messaging from the dark one, inviting you away from the path. You must ask your heart. That's what I do.

That is His wish and His command: Listen to the leaves, but don't fuck it up. When the spirit speaks, you had better listen, and then learn how to rake, bubba.

Many are culled, eschew the chosen.


And that, souls, is your Sunday School lesson. Take it home and ponder it, or read it at work on Monday, like a good, troubled Nick Drake verse.

Trifles are the new culinary joy.


I would not necessarily say that Nick Drake's music is suicidal, though it can be difficult to separate that desperate knowledge from the unique sadness and power of his singing. His gifts are of an otherworldly nature, and you all must certainly know how I detest such descriptions. Yet, here we are.

Bryter Later is one of his more hopeful albums; contained within it are the hopeful, romantic seeds of doom. An ecstatic Greek tragedy; the saddest chorus that never was. Waves of certainty and strength, nearly apologizing for ever telling you a story, vulnerable from absolute necessity.

Some claim that he died a virgin, old St. Nick. His sister has made the claim, in Rolling Stone, or somewhere.

Is there anything more disgraceful than that? To have your sister claiming you could never pull a bird, after your self-demise. She, with no discernible talents, save what the music media offers as recompense for the near obscurity of a life lived in accidental proximity to genius.

What a bitch, a model for Lot.

Song of Songs is the only book of the bible that I can stomach, anymore, which I don't bother with often. I promise.

If you've never read it then I suggest that you do, for the impulses briefly sketched out here, fighters of ink pen.

So much went wrong there, elsewhere.

SoS could be seen as a retelling of the myth of Eve, without all the denouncing of feminine mystique, mystery, and danger. I don't know, maybe things just end poorly. As with most biblical erotica, I only read the first few minutes and then turn it off, ready for sleep, or to focus on my wives.

I do not wish to appear gluttonous in the face of open sensuality.

Or, is that how we are truly meant to be. The prophets are very quiet when it comes to nothing.

Well, Bryter Later is complete. I am on to Pink Moon.

If my son were not sleeping here tonight then I would have my guitar out, pretending the unlit center of my living room was a mystery campfire. I would play along around it, just happy to be camping somewhere under the stars.


I'll be weeping before sunrise, Jeff Buckley by noon. Elliot Smith for dinner.


In the evening, as it arrives, we each canoe across the lake.