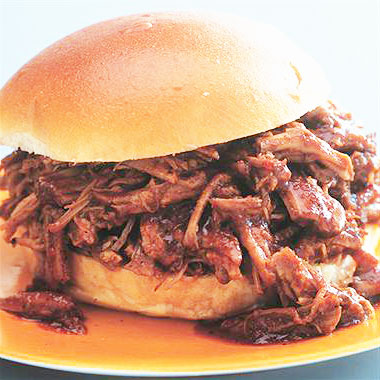 I challenge anybody that reads here to challenge me on this simple fact: I have never prepared a cooked meal, either for myself or for anybody else. Ever.

There are a handful of ex-girlfriends here on Facebook, an ex-other or so, a lifetime of friends, etc. None of them are capable of relaying a story about me cooking them dinner, neither has anybody seen me cook one for myself.

That all changed last night. I made 8-10 servings of pulled pork barbecue in a Crock Pot, which is a sort of electric/ceramic slow cooker that made its way over from the Old World. Lithuania, I think.

The boy and I will have pork sandwiches for a week, unless I decide to eat the entire thing right now, which I have been thinking about doing since it finished its six hour cook-time around midnight. The entire apartment smells of warm animal fats. Four pounds of slow cooked pork, some catsup, molasses, sriracha sauce, brown sugar, a bunch of other stuff, all purchased recently at the local market, then stirred together in a glass bowl.

Each sandwich only cost me about $25.

In fairness, I do have quite a few ingredients left over, awaiting the arrival of the future. The cost of each sandwich will drop dramatically the next few times I do this. I can probably offer them for sale, somewhere around $30 each.

No, I just had a sandwich and while I was eating the thing, with some sort of cabbage slaw that I bought with the other ingredients, it occurred to me that I have still not made myself a meal. I have simply expanded on my rather extensive sandwich knowledge.