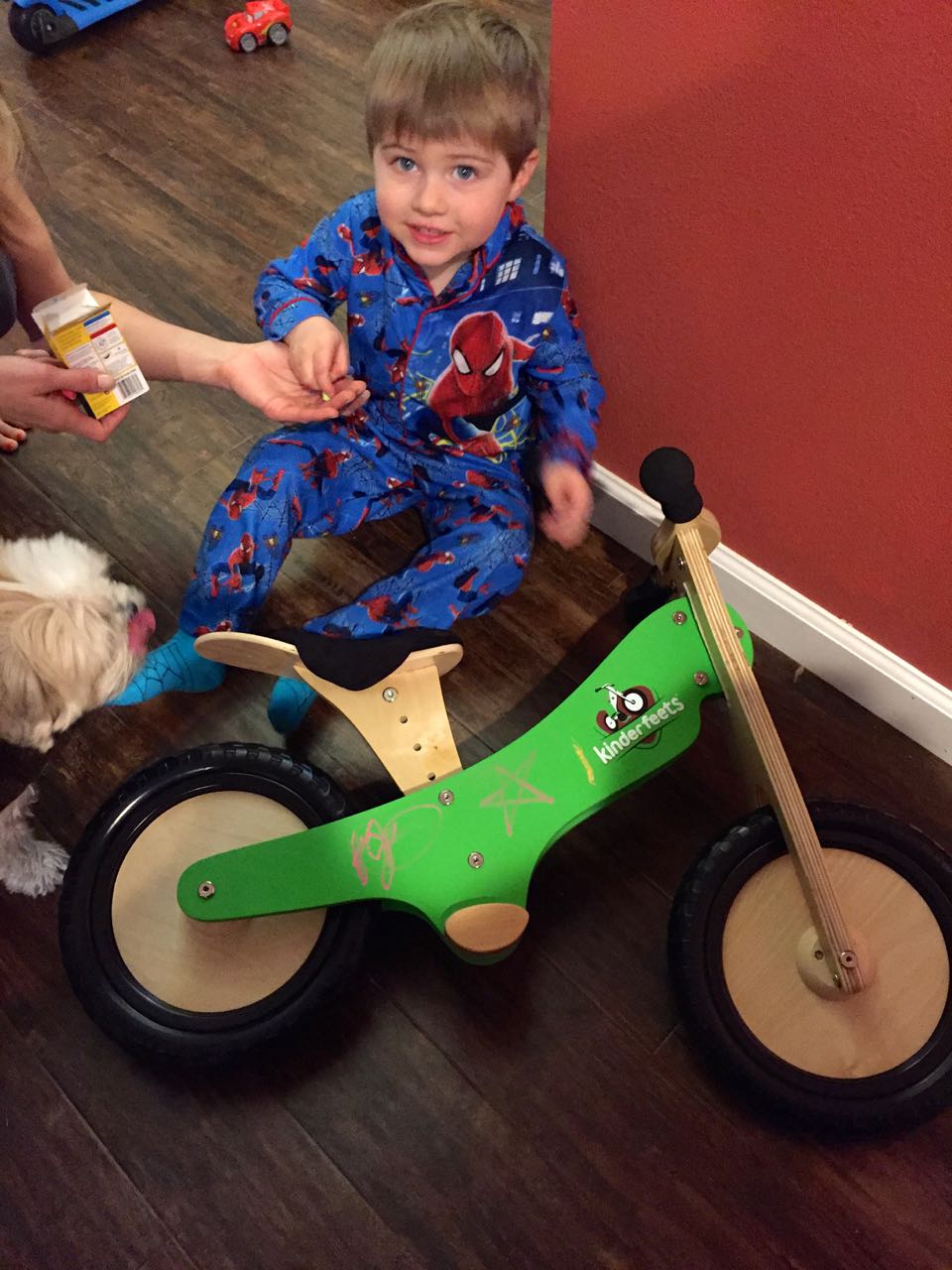 If you want a laugh.


Yesterday, even with a slight nasal cold, I decided that it was time to crack open some booty vino. I had the boy for the day and wanted to make dinner. Earlier, we had gone by a kitchen supply store and picked up a few medieval culinary devices that I still don't quite understand. Any standard American kitchen could be easily converted into a torture chamber, with a little imagination.

Salt and pepper shakers, a few cooking utensils, wine glasses, a sugar bowl, a cooking apron. While there, the guy that owned the place asked Rhys his favorite color.

A few moments later he comes out with an orange balloon tied to a string, filled with helium. The boy squealed with delight. The man looped the string around the boy's wrist and we were on our way.

We went by the grocery store and bought some veggies and chicken. We left the balloon in the car, to avoid the tears of loss.

When we got home I instructed the boy on the proper way to keep from losing a balloon, by not letting it go. We had to walk around the building to go in the door on the opposite side of the apartment for reasons that I will perhaps soon explain here. The boy did a great job at holding onto the balloon and we made it all the way into the place, with me emphasizing what will happen if he lets go of the string.

Once inside I set myself to the task of unwrapping my new utensils, washing them before use, finding the best place for them, etc.

I hear the boy excitedly screaming for my attention from the back bedroom. I dash.

I get there and I immediately realize that he has already figured out the latch mechanism on the sliding glass door, and he is standing outside pointing to the sky, ecstatic at the image of this balloon that he has just launched into infinity.

And he was right. It was great to stand there and watch it go.

I hope it doesn't kill any ducklings anywhere, or a dolphin. No alligators in California, so that's not a worry, not like it is in Florida.

Rachel came over to have dinner with us, bringing a salmon filet to complete our surf-and-fowl combo. She decided on a La Clarine Farm mourvedre, a varietal. Here is a video I produced about it. That gift of wine is already paying direct dividends. The wine was delicious, truly. Subtle. I would need to buy another bottle to do a review of it. It was one of less than 1500 bottles made, or sold. I was lucky enough to get one of them.

I don't think the wine paired all that well with the sweet and tangy barbecue sauce I was using on the chicken. Yes, barbecue sauce. What? I explained that I'm from Florida, and am now deeply involved in the California alligator preservation movement.

Asparagus, broccoli, brussel sprouts, caramelized onions with the chicken, salmon, and wine. I always list and consume my food in alphabetical order, etc.

After dinner it was time to give the boy a bath. I did the dishes - yes, I both cook and clean. While finishing, I happened upon an odd conversation emerging from the bathroom.

Mom and I have been trying to emphasize some basic life lessons to the boy. For reasons that I might not fully understand she was distributing this time-tested and reliable gem: Never trust a fart. I felt that it was perhaps a little too soon to launch this sage advice on a three year old boy, but Mom's always know best.

If a man is talking in the forest and there is no woman there to hear him, he is still very wrong.

In fairness, she washes more of his underwear, so she might be privy to some insider information, some squirt alerts. I was almost an adult by the time the full suspicion of turd tremors wisdom trickled down to me. Though in fairness, that was also the heyday of trickle-down policies in general.

Mommy was getting him ready to walk him home, so that I could get a good night's sleep and hopefully recover enough to go to the beach today.

She was trying to dry him off and get him to put on his underwear. He favors super-hero underwear, and I can't say that I entirely blame him. Every now and then it's nice to be able to factually relay to your friends that Spider-Man is crawling all over your balls. How else is the boy expected to learn these things, if not from his dad?

She offered him a fresh pair of non-branded underwear, not a Batman or Spidey in sight.

Rachel picked up the used Flash Gordon underwear, turned them inside out, and showed him a little circular poop stain.

Oh, don't touch that, he said.

He then lifted his leg, eager to try to get it in the clean pair that she had been offering. I've never seen him get underwear on so fast. Proud and happy about it, too. A sudden and thorough change of heart.


As they were leaving by the back door, Mom stopped for a moment to remind him.

Tell Daddy thanks for dinner...

His exit: Nice for seeing you, Daddy.