The problem of problems 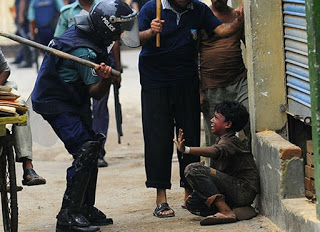 There is no federal law in the United States which requires police departments to report on how many people they have shot, or killed.

There is no federal law in the United States which requires police departments to report on how many people they have shot, or killed.

I try to have a balanced view of events, like the one still happening in Ferguson, Missouri. Online, people will sometimes prevent me from maintaining any such a view. They are often successful because I am easily excitable. But in my reading about the events in Ferguson I am reminded of this simple fact: we have no idea whether our anger about improper use of force is justified, or growing, or disproportionate, or not.

I hate to do this, but... The Constitution has a provision which calls for a periodic national census. It is incredibly expensive and yields questionable results, but a single addition would help us to better understand things.

Question: Was the cause of death an action inflicted by a government employee?

Oddly, we have statistics on gun violence. The police happily report on the violence that occurs. This is part of what helps justify the ongoing militarization of our law enforcement community, and they even include shootings and killings that they perform, but without clarity or distinction.

Read that sentence again, too.

The violence being inflicted upon us is used as partial justification for the increased use of force against us.

It gives a new meaning to the sometimes misemployed phrase of "domestic violence."

That what we do know shows a sharply unequal occurrence rate towards black men only further supports the need for a federal mandate for police to keep and publish records of the use of their weapons.

No distinction is made in bullets used for practice or on people. We are being taxed so that our own "protectors" can become better at abusing us.

I'm sorry I shot you, honey, but work has been so stressful lately. You know how my boss is always riding my ass.

What civilized society would allow the police of their nation to not have to maintain and present records of when they have killed their own citizens?

Shockingly, records are kept if the person is found guilty of a crime and the death occurs while in the care of the penal system. It is only presumed innocence that prevents us from knowing how many are put to death each year without a trial, or even a charge.

Even if cops were forced to prove that the person they killed was guilty of a crime, by a conviction in absentia, then we would know, or at least have an idea.

But a deceased person can not be charged criminally. That special use case is reserved for the civil courts, in the unlikely event they had anything of value, beyond their own breath.