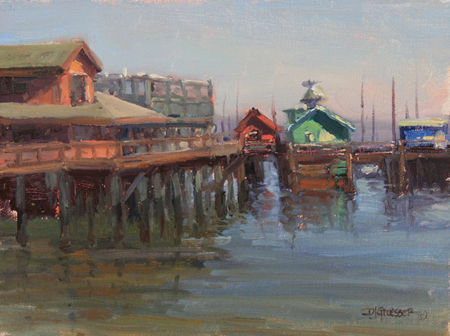 Jogging, again, out the door at 5am. Down to Fisherman's Wharf and back again. I love being in the city in the early morning.

The hills on returning, they are six steep blocks from the spot where the incline starts, though they are the short side of the rectangle. It doesn't seem that way, at all. By the time I summited I was in Denver, or at least at eye level with it.

Fisherman's Wharf. Even in the early morning there is a strong stench of pre and post-wrongness. When crowded, it's the kind of place that Humbert Humbert would bring Dolores Haze on a date. When empty it's like indigestion, washed in pepto-abysmal.

But it does feel good to be forcing some sausage out of my heart again.

Everybody has commented on my weight gain lately. It's unpleasant, fat. Some like it, for reasons that I might not ever understand. Some, like myself, can't seem to avoid it. I have always struggled with maintaining my ideal weight, which is anywhere below 200. It's because I am a monster of intake. Something clicks inside of me and I demand more.

But that is also true with exercise.

I have devised a system in which I will compete with the universe. Each week has seven points. Each day that I exercise for 30+ minutes I get a point, each day that I do not, the universe does. There are no ties in life any more, only glory or defeat. A little bit is not good enough. I either emerge each week victorious, or I get to wallow in my own ice-cream flavored tears.

I resist the concept of "empty calories" though I understand its importance in some people's thinking. No calories are empty, if they were then they would not be calories. It defies the logic of the definition. A better term would be lopsided calories. When your diet leans too heavily towards carbs or fats (or even proteins) then other areas suffer.

I was at my most fit when I was ingesting a near balance between the three. Not an even balance, but a balanced ratio. It's a lesson that I had forgotten until I was in Florida with my buddy CS. We were trying to buy yogurt and he refused to buy the 0%. He demanded 2% fats and was not going to be dissuaded. He is a very angry yogurt buyer, you see.

But it got me thinking.

I remembered that I used to insist on ingesting a certain amount of fat also, because my body was regularly using it, and it is good for you. I had burned off the excess by giving my body some of what it was letting go of, though slightly less than I was ingesting.

Homeostasis. You can't entirely deprive your body of something essential if you also wish to expel it. Your body will hold on to what it is not being fed.

The body does not know your plans. You must trick it into giving up what you do not want it to have. Feeding it fats will cause it to relinquish its fatty deposits, in increasingly larger doses as it learns to trust you.

But then you betray it, suddenly and without warning.

That's one reason why complete abstinence results in a boomeranging effect with weight. You are forcing your body to give something up, then it will seek to replace it as quickly as it can. Your body is not interested in your wishes.


This is my diet science. It worked much better for me when I inhabited a younger body.

The ghost in the machine is no longer ghostly, but rather overly earthly.