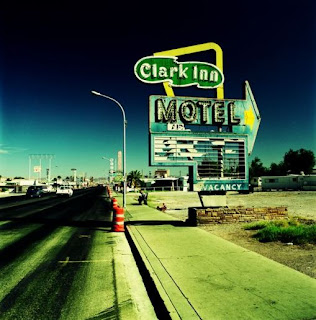 (Albert Watson)
A late one last night.  Up sipping glasses of wine, then right from the bottle, staring into the internet.  I was beaten and defeated by a particularly hard day at work yesterday.  Now I'm back at my same desk, surveying the damage.  Each night I'm like a vandal, each morning a contractor giving myself repair estimates, tapping my clipboard, looking around and nodding.
One time, long ago, I awoke at sunset, having fallen asleep around noon. I was still so high and dehydrated and thirsty that I took a big swig of soy sauce.  It was the only bottled, safe liquid I could find.  Everything else was moving, or seemed to be.  I was in a trailer with no power, far out in a field in east Florida. Later that night I smelled like salt, it was coming out of my pours, along with whatever accumulated toxins were trying to escape. The next morning a girl whom I'd known for some time told me that my skin smelled strange. When she kissed me she said I reminded her of rice, of chinese food.  Ah, soy sauce by candlelight...
What a fucked up life I used to live.  I've been thinking about it a lot lately.  Trying to piece together the years, the places, the times.  It is all like a single three dimensional rotating blur.  Some things seem out of focus when up close, others more distant.  Writing and reminiscing do strange things to the memory of self.  It forces the amorphous fiction of memory to become stricter, more narrative.  Re-telling the story in prose often makes it all become more rigid but also more absurd, more fantastic.  Memories then become something else, tales that only partly reflect the remembrances, forcing the impressions to answer to the fiction, to be told through it.   Suddenly the past is wearing a belt, and shoes.
Ok, today we go into the city, SF.  It will be our first full day out with the boy, a big leap for us, requiring some boldness and even more patience.  Perhaps tomorrow I'll fictionalize it, leaving out the soy sauce, and the unpowered trailers left nearly abandoned out in fields for reasons I'd rather barely not recall.
.
Posted by Sean Q6 at 10:53 AM