Duel to the death of Xenophobia 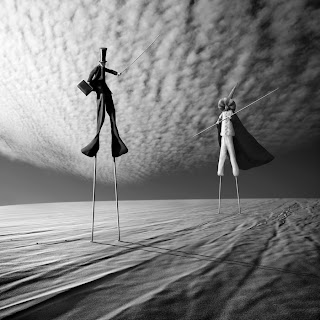 (Dariusz Klimczak, Duel)
I spent almost my whole day yesterday piddling around the house, playing on the internet, to no real benefit of my own.  Now I have errands all day today, things that must get done, then back to work tomorrow for six days straight.  Where does the time go?  I know that they say it is behind us now and not to worry about it. But does it always have to disappear so quickly as it goes.
I was going to write further about my "argument" with the quick-witted Belgian woman, but I've exhausted myself from trying.  One day wasted is already too much. If you enjoyed yesterday's post then read the comments section from this link and then this one.  Also, you should read his post from today.   I think everyone that comes here should also read his daily posts. He is a fantastic writer and photographer and a good friend. He tolerates my excesses for reasons I don't understand.
I wish I had more time to write today, perhaps later.  I want to get yesterday off of me. Most days I wish I could get the time back. This time I'm a little bit more eager to put distance between myself and then...
As I was writing that last sentence I heard an email arrive. It was an email thanking me for putting the jobs link up on my blog, telling me that I am kind, deserving of great rewards in life, financial compensations, etc.  Well, sort of.  See... all it takes is a little kindness to turn things around sometimes.  Sometimes.
I stayed up late last night listening to this cover song over and over. I spent about an hour doing a re-edit of it of my own.  I think it's a fantastic cover of one of my favorite Bob Dylan tracks.  I have a friend posting my re-edit to youtube and I'll post that here also when I get the link.  I hope they don't put me in jail over it. .. The times they are a-changin', you know.
I have to go into San Francisco today.  It's still exciting, to drive across the Golden Gate Bridge.  It is a fantastic view of the bay and out to sea the opposite way, with the rocky hills of Marin just behind you. Once when I was driving to Sonoma from SF, long before living here, I was was looking out across the bay.  I happened to turn my head and look the other direction and a massive aircraft carrier had just left the bay heading out to sea, with much of the crew and planes up on the deck.  It's difficult to describe how big those boats are, much larger than most cargo ships, much higher above the water, and wider.  It was an impressive site, no matter how you might feel about the military.  I'm all for peace, of course, as you might have imagined, but the sight of this vessel going out to see was really striking.  Perhaps "striking" isn't the right word.... I wouldn't want to incite additional accusations of Americanness.
It was a tremendous and unfamiliar view of something, but it didn't stir any nationalism or patriotism in me, nor would it normally.  There.
Oh, fuck it.  I've just decided to put off my errands until early next week.  I'm still feeling under the weather. Why do today what you can put off until tomorrow, or next week.  It's a beautiful day here in the valley. After taking a month off from work, when I finally did resume the drive back towards SF much had changed. The ground cover vegetation had really grown in, and in the middle of winter.  There were far more cows grazing in the fields.  It makes it easier to judge distances when there are many cows peppered along the way.  It is easy to believe things to be much closer than they are until you place a herd of cows in the distance.  When they are all nearly imperceptible dots it gives the mind a better reference.
Yesterday when Rachel and I were walking the baby and the puppy we came across what we believed to be a cherry blossom tree blooming.  This valley is the strangest place I've ever been. Things bloom at what seems to be very awkward, counter-intuitive times.  Just as the winter is beginning and right in the middle of winter there are various plants that you never even noticed before that suddenly cover the valley floor.  The late autumn blossoming of mustard plants all over the valley left fields that were previously vineyards covered in the yellow blossoms of mustard plants.  They are everywhere.
Ok, yesterday it was rainy all day, today has already become a blushing sky of blue.  I have a camera and a day suddenly wrenched free from cruel labor.  What would you do...? 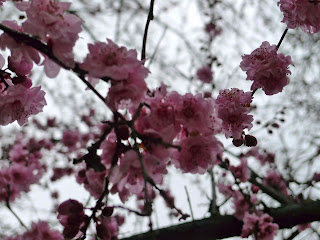