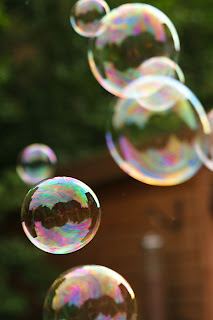 I awoke this morning and ate a Girl Scout Cookie, a thin mint.  They were left on the table from the night before.  It tasted nothing at all like a Girl Scout.  I wish the glass of wine next to it were not empty, but full. A glass of wine in the morning is a delicious thing, much better for you than orange juice.  It brings with it hope, promise and life eternal.  It was Jesus' first miracle and my personal favorite.  A glass of orange juice doesn't even deliver vitamin c any more.  I wonder what Jesus would do with a glass of orange juice were he to return.  Perhaps he might convert the lion's portion of it to vodka.  He's still very popular in Russia, you know.
We watched "Beat The Devil" last night. The John Huston film that was co-written by Truman Capote. I have seen it before, though it has been many years.  It started out quite good, with quick-witted dialogue and memorable shots.  By the midway point through the film I was bored witless and had lost all concern for it, not even a phrase like "rum-swilling double-crosser" could make me smile any more.  Parody is mainly interesting when done with an acute shrewdness, and cleverness.  Once you lose the wit then it becomes worse than the thing being lampooned, a sexless burlesque, unlit tassels lacking a body to animate them.
I did a search and discovered that when they went into production it was only half written. Huston and Capote completed it on the set as they were working.  Rarely a way to get great performances out of the actors and actresses.  Is that a word in which we are meant to use only the former and politely discard the latter.  The term "actress" is considered an insult of some sort in this newer, more courteous, genderless world.  Perhaps the phrase-constabularies will grant me this special dispensation because I am writing about a film that was produced when the term was still happily in use.
Or, let's believe for now that I wrote this post in Spanish and you are only reading the translation.  Yes, let's have the feminists take on Spain and then work their way back through Rome and Athens.  Or, is it too late... have the Honeys sacked Rome again already...?
I don't think one necessarily has to navigate their way through life with disdain, but there are few better lodestars than a healthy disbelief.
The boy, Rhys, makes these little sounds when he is sleeping.  They are charming to listen to when sleep is not an issue, but quite preventative otherwise.  I only slept for an hour or two last night. The rest was spent documenting the child's sleep noises in the most unofficial manner.  I have ear plugs but I don't like to wear them.  It makes me feel as if I have invited a bubble to sleep in my head with me.  Not a magic bubble, but just a dull one made of soft wax.
Didn't Michael Jackson used to fuck a midget named Bubbles?  Nope, I just looked it up, he used to fuck a monkey, apparently Bubbles was the actor's name.  I would prefer if red wine, Jesus-juice, had played no part in it though.  It seems to somehow taint the miraculous.
Ok....
I found this poem in the comments section over at Selavy.  I liked it so I will leave you with it in an attempt to elevate the content of today's post.  The name of the poet was not included, so neither is it included here. There might have been one additional line at the end of the poem, though I suspect not.  If so, then I am quoting each line here except the last.
The Weight of Being Eden

Ran into Ben Henry Howard,
In the black of the hotel cellar a few hours back.
He had only a short time to spare and spoke
Full of confidence and consequence,
With his dromedary bottom lip,
And that speck of know-it-all worn by cosmic gurus.
The moths swarmed the solitary condemned glow
Like constellations in motion; peering, swirling,
Eyeballs gazing back from the mirrored walls
Smeared with interstellar dust
Painted in pigments of love and lust.

He suggested I kill my imagination
And count my chickens before they hatch
And begin to scratch at their shells and beg for food.
To do this would unhook the clasp of mystery's cloak
And send it floating rumpled to the floor beneath the hat rack,
Until it climbs again to weave golden thread as it did before.

You can feel the Spice Islands' tradewinds
Warm your face before they pale upon the backs of whales
Across the shorn spring lambs skin
Of the bleating North Atlantic toward a battered bowing inn on the shore.
The torches light the drooping tropic night
That sags beneath the weight of its own perfume
And the weight of being Eden in each extreme.

It is always day where it snows.
Always white with perpetual light and fleshful of pumping blood,
Adieu, Adieu.
The last kiss before boarding a train
Lies frozen beneath the slow drifts
That creep motionless across artifice of day.

Look, there, another plump thigh
In purple garters warbling the songbird's goodbye to night,
Adieu, Adieu.
And I simply wait and hope the telephone rings
For a conversation about the evening's mundane trials
With the inevitable farewell, awkward and sterile
As it always is across the lines, across the miles. Â
And I simply wait and ventilate the balmy breath
That blows unseen between the wiry veins of all things.

See that wall there. It never whispers
Or cracks its toes or masks its intent
To become the universe in miniature.
Best as anyone knows it bears its load
And waits like a curious turtle in repose.

A thousand sermons dangle
Condemned sprung jacks in their boxes
They bounce and cackle from the tree's unsteady arms.
Each one naked knowledge,
A singular original sin to pluck and bite
And with delight begin another lapsarian lineage,
Rise, line of Cain, Rise, line of Eve
We are all fallen here,
Get up and breathe.

An empty urn black with tarnish
Greets the tongueless thirsty traveler
Beneath the neon's flinty flickers
And the maypole's sundered wreath.
We are the spring sprung children
Spinning, spin, spin
Spin with your nectar-ripe ribbons
So that we all may be born again and again.

My head is full of numbers
Manipulated and constantly recogitated in an endless algebra
To push aside the regret and all that is lost with it.
This time I hear the drums
Pound and drum beneath the Banyan tree
And between the fixed wooden wings
Of the samurai city's soaring gates.

All Hail a little sprig of jasmine, dazzling,
And placed in her hair, just behind the curve of the ear,
Or a wedge of lemon in the blue iris of her stare,
Come, Rise, Hail, Spin, Adieu- and again.
A deposed simple primeval emperor
Marches across the cold vast silver
Folds of the budding rose
As it sways in the infinite fileds
On an ordinary day,
And now it's best I be on my way.
.
Posted by Sean Q6 at 6:49 AM