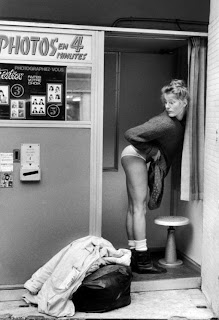 I thought that I had posted this late last night, must have fallen asleep before I got around to it.


I got off late from work, have to go back early tomorrow.  So, tonight I write. There will be no time for it in the morning.
Everyone seemed to like this morning's musically reminiscent post.   My readership has bounced back.  It is an evil thing to be able to track the amount of readers I have.  It is masturbation without orgasm, without arms, with just swollen feline balls that yearn only to be shaved.  It's worse than choosing to listen to Sting's music.  It is a sin.  It's like Tab, Tang or Nair.
When I first started the blog I would occasionally run into people who would tell me how often they read it. Then they'd back it up by citing a few of their favorite posts, or buying me a drink if I was lucky.  It was very nice, it confirmed a thing that I liked to believe about myself.  Then, I found out how to see the daily pageviews, and then after that I found Google Analytics, my true undoing.
Now I am obsessed.  I'm like a tantric cocaine addict yoga sex fiend, talking about Sting.
I had a reader from Nepal last week who stayed on the site for 5 hours and read almost 100 posts.  Within one week my readership in Pakistan, Afghanistan and Bhutan has quadrupled 4 times over, each.  Nepal is now in my top 10 countries for readership this month.  When you have information access of this type the world becomes a fresh new mystery once again,  I pray for all of us.

I wonder what they're fascinated with, what they must be thinking.  I hope they are not chanting, "You must die, you little grape satan, the one who makes us suffer so..."  I hope.  Even I, readers, pray for that, especially if they are new women readers.  When Google Analytics is able to tell what gender the person browsing is then they will have really ended the "equality" contention once and for all.  I have never heard a cry for equality that actually seeks equality.  Nobody wants to be equal.  People want power.
The Google evidence will be data of the evil empirical kind...  There will be endless studies into the future showing how Google modified the message, massaged the data, to please the readers, to never shock the shoppers.  The data of the future will always appease.  Only the past will transgress, in whatever way you choose.  In the future all things will sell well.
To wit, the title of this post and the image used above are tricks to attract more readers.  It is unsurprising how many people will click on a link that uses the words that I have in the title of this post.  Or, others similarly related.  They'll only stay on the site for 10 seconds or less but it'll cause a rush of quick visitors as soon as I post.  I've watched it happen. Then they'll realize that it's not actually a blonde-panty-fetish-site and they'll move on, presumably to more reputable fixation sites that suit their particular needs of consumption.
I sometimes wish that I could follow them.  Oh, that I magically had that power, that info., as if I were Google, not in all places at one time.... but following all interests, at one time.... Soiling unsold panties, for science.
If "ogle" were a "d" then Google would be God.
Out of curiosity I did a search for the title of my post today, "Nude peep show, cotton panties, blondes" and found this site as the top hit...  http://pantiespics.net/
Do not copy and paste that link into another window or tab unless you actually do want to see girls' underwear, in all manner of indecency, disrespect and occasional nicety.
The internet is a crazy place with much power and people act accordingly towards it.  It is a uni-inverse. People appease the unknown, for reasons of even greater unknown. They will reveal themselves to the great unseen, merely hoping to be seen by the maelstrom of anything.  Each computer screen functions as a two-way mirror.
Holy Crap!  I just clicked on that link again, in the hopes of formulating a more descriptive word for women's online under-naughties, and all of the images had changed to others, some not even blondes.
The lovelies were gone.
I was briefly amazed at how many of the thumbnails I had memorized.  The new images were not quite as alluring as the first ones, but then I looked more closely and I realized my error.  There is much merit in else, just have a close look.  Ignore what I said earlier about equality.  Seeking equality is as useful as it sounds.  It is a way of praising nothing, believing less.
The mind sure is a silly organ, it gets played like an accordion at every carnival.  Life can only be amplified or telescoped or made melodious for so long.  The strangeness and wonder of the weird always seems to pack up and leave for another town, no matter how festive and meant-for-you it might have seemed just at or just after sunset, mixed with the dawn's cotton candies.  In the morning you are left with the fading image of what you thought the festival was when it was really only being a fair.
Posted by Sean Q6 at 9:44 AM