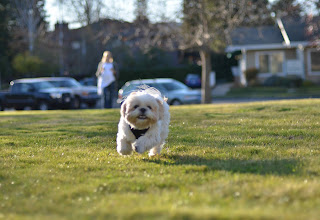 (Chrysanthemum in full sprint)
Well, half of my weekend is over.  A day sure does slip by, especially when lubricated.  Red wine functions as WD-40 on time, or perhaps K-Y jelly.  But oh my, does it sure make me giggle sometimes as the world flies by.
Or, does it just disappear.
I went to bed early last night, hoping to also wake up early, with the intention of writing.  Now I sit here with a blank screen.  Hold on, I'll go make some tea...
Ok, let's see if that has the desired effect.  I have shifted away from coffee to help sustain my diet of no dairy, no fried foods and no soda.  I do love Earl Grey tea.  I recall that the character in "Kafka on the Shore" also loved it.  It's too bad that love for tea was all that was shared between myself and that book.  I tried to read it.  I was never able to finish it.  I don't get the fascination with, and success of, Murakami.  The writing is very poor, the ideas are puerile, and nothing in the writing seems designed to capture or sustain my interest.  It is a world of magical talking cats that is somehow even more boring for them being so.  Some people seem to believe that an inexplicably talking cat is a major theme, worthy of much speculation, and needing no explanation when sheer evidencelessness will suffice.
When I was younger I became interested in a style of writing known as magical-realism.  Murakami's style might best be described as magical-boredom.  I have been told that my starting with "Kafka on the Shore" might have been my mistake, though I strain to understand how.  It's been relayed to me by a faithful reader here that "Norwegian Wood" is truly the one to start with.  We'll see.  I found it to be much less stream-of-consciousness writing than that the writer really didn't quite know what to say next and simply had to somehow finish the book for publication, or perhaps even for other, less important reasons.  It was just forced invention after forced invention.  There was the sensation that it was a story unfolding in the mind of a child, and not a very literate one at that.  I suppose one day I'll see how he handles loss and sexuality with "Norwegian Wood."
No, wait... I just went to do a little research on it and on one page it was described as a "coming of age" novel.  That sounds like it might be a little too close to the other for me.  I'm not sure I want to read another book that primarily appeals to teenagers.  I remember reading once that Murakami studied western literature and that's why his stories are somewhat unrepresentative of Japanese literature.  But I'm not sure if that's a selling point that works for me when there are so many great writers to choose from already, Franz Kafka among them.  Perhaps it's part of his success in the west though.  Who knows.  Maybe I just don't "get" the pastiche of postmodern literature.   Just because a talking cat is not supposed to be in a novel doesn't mean that it should be.  It's like reading a novel by Nostradamus, the hair stylist.
Artifice upon artifice, endlessly rolling, we prattle onward.
"For I am nothing, if not critical."
.
Posted by Sean Q6 at 6:46 AM