The free association for the denial of science 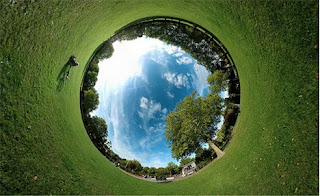 (the sky is round)
So, there now exists empirical evidence that conservatism appeals to dumb racists.  Sort of.  They don't start out as racists, they just end up there.  A Canadian study claims it, then proves it, empirically.  Here is the abstract for the study.  It is worth following the links and reading the actual report, which I finally did for the first time this morning.  I had been reading a few articles about this study on Slate. But this morning Selavy sent over a new article over from The Guardian that made some salient points, mixed in with some prejudicial thinking of its own.  Or, is it just categorical thought...  I get confused with the terms.  Do you use the polite ones to describe the left and the remaining ones for the right?
That feels about right, right?
"Importantly, it shows that prejudice tends not to arise directly from low intelligence but from the conservative ideologies to which people of low intelligence are drawn." - George Monbiot
Seems sensible.  What other explanation could there be for so many people being drawn to conservative ideals... ?  Stupidity explains everything!
Maybe that's the problem, it is mainly one of perception.  The world's view of Americans is not incorrect but rather statistically misshapen.  The view of Americans formed by the rest of the world is from the media image of a disproportionally exaggerated right-wing.  There must be studies reflecting the frequency of right-wing rhetoric being aired on international television when reporting on America's political process as opposed to left-wing counter argument or liberal initiatives.  It certainly would explain a few things.  For example, why so many foreigners treat Americans as if they are all Republicans.  It's as if they refuse to believe there could be a true liberal in America.
Perhaps there aren't.  Perhaps I've only seen them on tv, where 9/11 happened.
Well, this study should do well to help balance out the conversation in America, if nothing else.  Now, along with global warming, creationism, the moon landing and gun control we'll have the science of stupidity to deal with also.  Yet another good talking point to advance science, or the denial thereof.  The emerging field in science will be the study of the denial of science.  You'd never run out of funding.  Both sides would be happy to fill your pockets.
If nothing else this study should somewhat change the conversation on college campuses.
I can hear it now:  "You do realize why you're dumb, right?  It is simple science, you poor misguided simpleton.  You're making the earth warm from your prejudicial thought.  Your racism is melting the ice caps.  Do you even know what ice is?  Morons are a religious group in Utah, dumb-ass.  All of this is happening only because you were afraid that you might be a homosexual when you were young.  It's okay to be scared, you're just stupid, straights often are..."
We'll see...
Well, the ever-enlightened left will anyway.
.
Posted by Sean Q6 at 10:47 AM