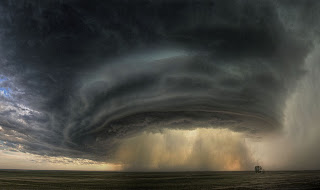 Last night I stayed up late listening to music.  I was searching for a replacement to an old album of mine. The copy I have is poor in quality.  It's one of the better examples of its type from almost 20 years ago, "ambient-techno" is the stated genre.  For me the album still holds much magic. I listened to it twice in succession last night.  It's like a time capsule from that period, bringing with it strange and wonderful feelings from the past.
The album never achieved wide success, though I fail to understand why.  It is much worthier than many albums that somehow did achieve notoriety.  I suppose the word "success" can hardly be used to describe much of the music from that time period.  It was made mostly for enthusiasts alone and certainly did achieve success at that level.  But rarely were the artists compelled to make much more of the music they were making because the financial compensation didn't allow for it, mostly.  The musicians path to the future is often narrow and rocky, and sometimes bullwinkled.
I'm being a little bit vague.  The album is by an artist named Syzygy and the album's title is "Morphic Resonance."  Going back and listening to it is, in some ways, like getting to re-experience a little portion of my life from that time.  A memorable time for me, though one that often lacks clear and distinct memories.  There was a period from about 1989-2005 that could be described as an extended blur of psychedelic elation.  There were other feelings but that's the one that I choose to remember over the others.  Listening to this album carries me with it back to that time, in spirit.  Well, it did last night anyway.
Ok, enough nostalgia for this morning.  I was having a moment last night listening to it and thought to convey it here.  But as an old friend once said to me, "Other people's nostalgia is dangerous."  So, I'll leave it there.  I'm listening to the album again now and it still amazes and delights me.
------------
All of the parents are gone and now I must find something to do with myself.  Only two more days before I return to work.  There is a distinct feeling that time is running out for me.  There were so many things that I had hoped to do while I was on this leave from work, none of which happened. Having parents visit is a full-time job in itself, leaving little room for else.  Seeing my father was great but he is getting older and is becoming increasingly distracted, though mostly in an entertaining way, not in the frightening or painful way.
At one point he wandered around the apartment picking up other people's iphones and deleting things he didn't recognize, like the baby's feeding and eating schedule for the previous week.  It took him hitting the delete button, and the delete verification button, seven times each before he started to question why there was all of this information in his phone about Rhys' timetables, and why his phone no longer had a case on it, and why it was a different model from his, a different color, etc.  It was almost like having a toddler in the house in addition to the infant.  One must always be on guard.  Never leave things out on the table that he can reach.
But I already miss him a little bit.  I only kid about the phone...  I'm sure Rachel has it all backed up.
.
Posted by Sean Q6 at 8:38 AM