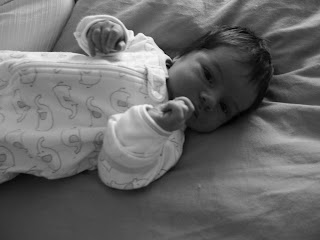 I got a very flattering email this morning.  Those are always nice.  You will never lack for someone to listen to you when you are flattering me.   This site was not set up to be a job search engine, as some of you might have guessed. But if you find yourself reading posts here when you should really be looking for a job then console yourself with the new link on my page for Jooble  It is an aggregate job-search engine.  My readers will no longer have to feel guilty about such trivial matters as being unemployed.  You can assuage those guilty feelings by reading posts to your heart's content, knowing that a job might be just one more accidental click away.  It is the very least that I can do for my readers in these trying economic times.
Worry no more, dear readers. Guilt will never be welcome here....
I came up with an idea to write a children's story last night.  I had drank a bottle of wine and the idea seemed great, and necessary.  Selavy jokes about me becoming a James Thurber, but he forgets that Oscar Wilde, Leo Tolstoy, Virginia Woolf, Mark Twain, T.S. Eliot and James Joyce also wrote children's books and stories.  But that is neither here nor there, my suspicion is that he was being snide, and I am not comparing myself to any of those writers, nor attempting to place myself among them.  My point is only that many great writers have committed themselves to the act of writing literature for children.  Antoine De Saint-Exupery is known mostly for "Le Petit Prince" but he also wrote many fine novels for adults, "Night Flight" and "Wind, Sand and Stars" among them.  The former is an excellent novella and the latter also an exceptional novel.
But back to my point.  I forgot to write down my concept in full and when I woke up this morning the only remaining evidence of the idea was a post-it note that states "Animals tending a garden."  I'd say my children's book idea is off to a great start so far.  I seem to remember something about one of the animals dying and then the animals and vegetables coming to terms with it, and what to do with it.  Cannibalism was a strong theme that ran through the idea, comparing carnivorous behavior to vegetarianism, for kids...  The remaining carcass was then used as fertilizer, completing the cycle of farm life.
Perhaps I'll leave the children's stories to Tolstoy for now.
Ah yes, a story I meant to relay from when my father was here but forgot to... Somebody from Texas accidentally dialed my father's phone number while we were out walking the dog. The guy on the other end of the line mumbled something about wanting to know where his truck was.  My dad told him that he thought he had the wrong number, the guy hung up.  He called back a few minutes later and a similar conversation ensued, with a similar ending. Then my dad received a text message in a sort of broken English that sometimes passes for language in these topsy-turvy times.  It was riddled with confusion and abbreviated misspellings. I asked my dad to look at the number, which I immediately memorized.  As we were walking, without my father's knowledge I texted the guy, "If you ever want to see yur truck alive agin then DO NOT call that numbr, 1-900-YUR-DUMB... You've been wurned." Then a few minutes later I followed it up with, "Yur truk is safe, but DO NOT call that numbr, ever."
We kept walking the dog and my dad's phone rang again.  This time I asked if I could answer it.  He handed the phone to me.
"Hello"
"Yeah, what's up?"
I said, "Are you in your truck right now?"
"Yeah."
"Then there's nothing to worry about, right?"
"Yeah."
"We're good, right?"
"Yeah."
"Don't call this number again.  This line is tapped."
He hung up immediately, never to call again. My father asked what that was all about and I showed him the texts I sent.  At first he was in shocked disbelief, bordering on frustration at such an irresponsible act.  Then it resolved into laughter.  He couldn't believe that I was willing to do something so pointless, and potentially dangerous (in his mind), just for kicks.  He thought the line, "If you ever want to see your truck alive again" was one of the funniest things he had ever heard.  It was then that he realized something about me that perhaps he had never quite noticed in full before.  He was genuinely pleased with me. I could tell. The very thing that he spent my younger years trying to dissuade me from, I had become, and had been all along, an adherent to the absurd.

With him approaching 80 I was pleased to have had the moment with him, simple as it was.
I have been writing this post with one hand, the other cradling Rhys so that Rachel can get some sleep.  It has not been an easy task as the boy has been crying about half of the time.  I've learned a few tactics to console him but none that are guarantees.  I go back to work tomorrow, where hopefully I'll have a much better idea of what I'm doing. We'll see.
Ok, if you're looking for a job then let Jooble help you..... click into the future.....
.
Posted by Sean Q6 at 10:52 AM