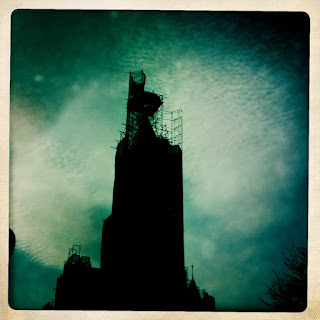 Grey day.  Not even the thought of coffee could get me out of bed.  Just Barkley and myself watching tv in repose.  Not even good tv.  My favorite programs have all fallen apart on me.  I won't tell you what they are, it'll age me too much, and old selavy will see it as an "in" to denounce me as being "orthodox", a damning assessment in the edgy world of the internet.  A risk I simply can not take.  I don't even watch new shows on tv, all of the ones I watch are in their 5th season, or more.  The dog and I eagerly await the the return of Mad Men...

Ok, the coffee is taking hold now.  It's making me want a beer.  The body's chemistry is a delicate balance and much care must be taken with it.  Also, I have to work today... Wait, I choose to work today, so a beer is almost out of the question.

A car alarm is going off behind me somewhere, out the window, down on the street, fighting its way through the thick grey to get to my ears.  It stopped, then it started again.


I would describe myself as a Stevie Wonder fan.  I have all of his albums from the 70's, even the Syreeta stuff.  I have several of the 80's albums, though I don't often admit to it, much less listen to them. I actually love "Journey through the Secret Life of Plants", an album that most people dismiss as pompous and self-involved.  It WAS a soundtrack for fuck's sake.  What other artist gets so disregarded for a soundtrack?  Thank God Prince stopped making movies....

I own absolutely no S.W. material after 1985.  "We Are The World" ruined it all for me.  I can even occasionally stomach "I Just Called To Say I Love You" if nobody's watching.... Has there ever been a more arrogant song than "We Are The World"?  Talk about defining others through otherness, wow. Wait, I was going to make fun of the song but then I went back and watched it on youtube.  I'm a hopeless sucker...  I think Bruce Springsteen might have crapped his pants during the filming of that video, twice.

Does anybody remember in 1999 when Oscar De La Hoya pooped his pants in the first round during the fight against Felix Trinidad?  This is all speculation, of course, but an early punch thrown by Trinidad in the 1st round stopped De La Hoya and I predicted then that he had pooped his pants.  Nobody else in the world has ever agreed with me, and certainly no boxing fans will listen to my wild theories for very long without offering to knock my nose in, but I believe my boxing-poop stories, each and every one of them.

Anyway, I often play S.W. albums at work in their entirety.  There was a girl there who was attempting to sing along with one of them, expressing her like-minded fondness for S.W., in her own way.  At one point Stevie launched into some solo acrobatics and really flexed his vocal talents. She exclaimed simply, "I'm not even gonna' to try to keep up"...


"You've been out of key and out of time for about an hour, why stop now?"

It is for this, and things like it, that people hate me.  I am certain of it.

I would say that, "I don't know why I don't keep my mouth shut" but it wasn't me that needed to this time.  Why must the suffering of the world go on and on and on and on, perpetually, ad quod damnum.

I am the victim here.


Ok, nothing else to report today.  I will be updating the world with my boxing opinions, especially on those fights already discussed into the ground, ad nauseam. I will be bringing fresh and much needed perspective to the sport in this way.  Am I the only one that thinks Bert Sugar is the white Don King?  Just having to look at pictures of him in the daylight turns me forever off from the sport.  I prefer Teddy Atlas's good-hearted mispronunciation and misuse of phrases any day.  My dream is to watch Bert Sugar give up smoking cigars and lose that awful bookie's hat, then retire from public life altogether.  A meager dream, but it is what gets me out of bed some days.... that, and the coffee, and the car alarms.
Posted by Sean Q6 at 8:39 AM