In search of lost notes 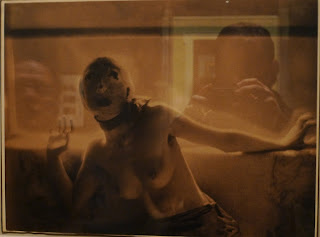 I keep waking up and falling back asleep. I can't tell what is dream and what is half-imagined memory or fear.  Strange things find their way into my waking thoughts, unquestioned and unable to escape. I dreamt about a lost book of photography and when I awoke I looked for it for several minutes before I separated the dream from my morning, the fantasy from my apartment bookshelf.

I found a way of searching my mail app. for the lost notes.  The problem is that I must find a unique word in each of the notes to search for it.  They don't show up listed in any normal folder, but they are somehow searchable.

I found one late last night and it was updated up until the night before.

The problem is that no matter how many of them I find I will always believe there was some lost brilliance, floating out on the aether, unreachable.

Probably not, but such is the fantasy of loss.  The one that got away.

The pictures above and below were taken by me at The Met.  Pictures of pictures. They are either Stieglitz, Steichen or Strand.  I believe it is Stieglitz above and Steichen below, though I'm not sure.  There is, of course, my reflection in the image above, and some hairy-faced pervert that would not go away.  I enjoy the walls of The Met, but the people can be tedious.  It is always a depraved wonder to overhear their conversations.

Yikes, speaking of overheard conversations.  I went to the lobby bar at The Parker Meridien Hotel with my buddy and his wife, who were celebrating her 30th birthday.  While I was waiting for them to arrive I overheard a woman, she was discussing the lobby of the hotel, the ceiling.  This is her gem, word for word:  "It's like Paris.  I've never actually been to Paris, but it's what I imagine it to be like."

This was from one of the saved notes that I recovered.

The word that I used to search was "whiskey."  This was the sentence I was hoping would be found: "It's somewhat difficult to get drunk on beer, very easy with wine, and impossible not to with whiskey."

All true.  I think I might have even used the sentence in a post from a few days ago, referencing the self-governing properties of beer.  I'm too lazy to search any more.  It is an odd thing to use your computer to search for yourself, for your own thoughts.  Knowing that if even a single unique fragment would spring to mind then you could use it against the machine and regain some lost piece, some semi-coherent fragment, of self.

I think my reflection taking the picture of the picture in the image above is all that I can stand to recover for now.

My two written examples just above prove that the notes might not be the lost writings of Joyce, but sometimes all it takes is an idea to get you started on something, sometimes not. 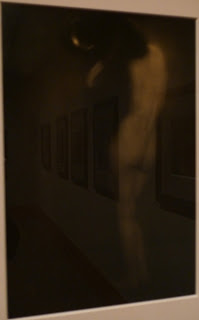