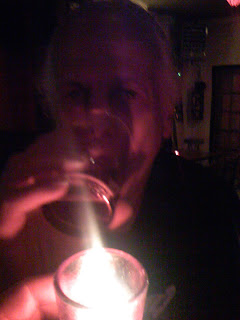 It has been just over a year since my friend from the neighborhood passed away, Bob.  Time does an odd thing when it is forced to.

Mortality reminds us of mortality, then life.

When I reflect that a year has passed since his passing I am reminded firstly of him, but then of the oddness of time, its awkward trick of the mind.  It seems that it has been longer than a year, but somehow only a few short weeks since I have seen him.  Numbers align against me.  As I gain age my relationship to death changes.  It is more easily accepted in others now, almost expected.  I come to terms with the passing of acquaintances more quickly, though repetition has offered an invaluable subsidy in that regard.

More has happened to me now, and others likewise.  History accumulates, etc.


I have no memory of death until perhaps the age of 7 or 8 years old.  I had to call my brother to verify.  It was a friend of my father's who had died.  I saw the casket-bound body with young frightened eyes.  I was stridently requested by my mother to pray in front of it, for it, to show it reverence.  My brother was crying, which scared me, so I was crying also.  Years later I decided only to pray when crying. That is when prayers breach heaven's ears most effectively, through tears.

One's sense of time's passing from one Superbowl to the next is very different from a single year since the death of a friend, unmarked by ritual or acknowledgement, by most. The Superbowl happens every time you need it to, at a sensible distance from the previous one. Death offers no similar courtesies.  Death is rude... it is also patient, it is often unkind, it always perseveres, death never fails.... death never fails... and now these three remain: death, doom, destruction...


Robert Scarano, a hawk with a bad shoulder.
Bob, a hawk with one great shoulder.
R. Scarano, standing on the shoulders of giant gnats.
Bobby, a lover of constrictors, reptiles and birds alike.


Bob usually assumed that you were as curious about life as he was, and would talk about all things with an almost equal passion. An awkward zeal that favored airborne conspiracy, the always tandem helicopters above, the ever-present belief in and resistance to Black-Ops....


I have also been a periodic enthusiast for the lot of all things.  It often leaves me exhausted towards the mundane interactions that are so necessary for the semblance of a normal life.  It's not that I'm incapable of having civil interactions, it's only that most of them vaguely disgust me, fill me with dread, as if my lungs filled with lead.  Pedestrian morality sickens my sensibilities, though I often long for it.  Ahh, only to be able to conduct life as if it were a well-run suburb of moderated landscapes, a day-job of interests, a 401k of joys....

I am talking about myself, rather that Bob.  Do you see what a year will do...  He would hate this.


As I was writing this, drinking a beer, I accidentally spilled some beer on my pants, paying too much attention to what I was thinking, and too little to what I was doing.

One of my brother's friends, at his wedding, described the experience of talking to me thusly: It's like being on a bender.

It is for this reason alone that I shouldn't do drugs, though there are also other reasons.

Clouds are a dangerous metaphor to teach a child, especially one with an interest in science.  I've had teachers that encouraged us to see things in the sky, to name them, describe them to others, then let them pass.  It is a game of imagination, you see.  All of that water vapor ends right back up in the ocean, never to return in our lifetime.  I imagined that.


The message here is that humans are capable of immense untutored beauty, though they produce very little of it.  Bob did a little of both.

The possibilities seemed both daily and endless.


Sympathy For A Devil