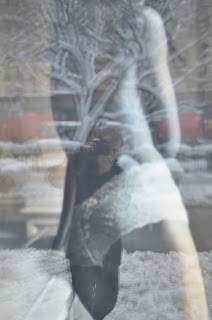 (unexpecting is not a word)

I've decided to do a new photo/essay series.  It will be all semi-nudes, shot semi-live in the streets of New York, with pedestrians happening upon the photo-shoot both unexpecting and semi-unaware, participating without knowledge or consent, mostly.  I will (of course) be in most of the photos as well, overdressed, but eager to participate in partial nudity, as always, in any way that I can... the cool and distant recorder of the smoldering sensuality of the models, protected by glass.

Oh wait, that's been done before, and I don't have many models willing to get naked for free, nor do I have resources, or time.  But my god... there sure is some beautiful booty-pie to look at here and there, spread out generously across the city. 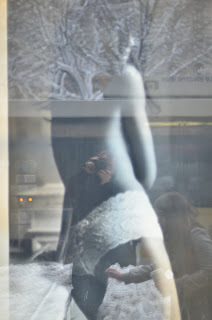 (nor is aqtor)
I feel a little bit guilty looking at this picture above.  Whenever the model turns and looks at me I feel guilty, especially as someone is passing, just trying to walk their dog.  There is a fantastic passage in the book "A Sport and a Pastime" by James Salter that describes a man standing behind a young naked woman who is facing forward, lying down, preparing to be entered from behind, or should I rather say in behind.  Anyway, he is holding a jar of vaseline in his hand and he describes the guilt and shame he would feel if she were to turn around and see him holding the thing, the article of sin, the embodiment of the act to follow.  But it is not the act itself which he is ashamed of, it is only that he should be seen holding the jar which enables it.  I have perhaps remembered the passage wrong, but that is the effect it had on me.
This picture does a similar thing.  I like the framing of it.  A frowzy woman just trying to walk her dog, with a bus passing by, temporarily separating the reflection of the abdomen of the model from the reflection of the tree, while revealing it more for what it is, a body.
It looks like the woman walking the dog is trying to insert my ding-dong into the model's booty-crack.
That must be a mirage, an urbana fata morgana.
"w're al' but aqtors, fueling rselves along a sinsless oddisy..." - senetesticles
Posted by Sean Q6 at 9:14 AM