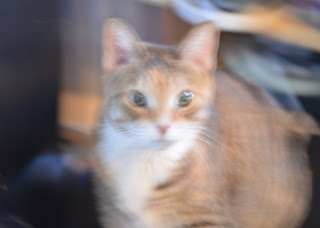 Last night, after our second trip to Brooklyn and back, when we returned home, after walking the dog, we found a cat stranded in the hallway of our apartment building. As we were walking upstairs only a few minutes earlier we had heard the celebratory sounds of a party, the youthful bursts of laughter, barely distinguishable from the sounds of breaking glass. Then there were the sounds of a great argument, some unbridgeable misunderstanding, or sudden unexpected knowledge, perhaps an infidelity, the slamming of doors, yelling, the sounds of breaking glass.  Something had shattered the mood of the party.

The very friendly cat remained in the hallway, looking for an entrance to return home.

We knocked, there was a sound behind the door, we knocked again, more sounds of movement.

This went on for minutes.  Nothing.

We took the cat into our apartment.  Barkley, our dog, responded immediately and in kind.  The cat, however, had claws.  Barkley was simply too curious. They must be kept apart.  We tried everything.  There are no doors in our apartment other than the front one.

I went down to the superintendent's apartment and knocked. It was after midnight. He came to the door, shirtless.  I asked if he had keys to the apartment on the first floor, in the back.  He said, no. I questioned his opinion on proper procedural protocol. He was as useless as the day he was born.

I returned to the budding zoo upstairs.  It had become clear that the cat would be with us for the night.  My wife and I created a hodgepodge stronghold against canine/feline interaction between the bedroom and the living room.  It was also becoming clear that I would be sleeping on the floor of the living room.  Frisco, as I had already named him, even though she was a female, was not about to allow us to lock ourselves up in the bedroom while she was on the outs.  I prepared my fate with pillow and comforter, a crepe thin yoga mat would be the only thing between myself and the carpet, then the wood floor.

I took a klonopin and awaited its many anti-epileptic comforts.

The cat purred and rubbed its head against my head and gave me cat mustache with its tail, ever returning, ever purring.  I could feel the sleep window passing by, forever.

The sun came up after 20 or 30 hours of waiting.  I went back downstairs and knocked on the door, no movement this time.  I left a second note:

We have your cat, if you ever want to see it alive again you will do exactly as you're told with no deviance from our instructions.

No, it was our phone number, and instructions to call.

Tomorrow we will have her spayed and declawed, get her booster shots, perhaps have her hair dyed to conceal her identity, get her an identifier tattoo on her inner ear, and a new collar. 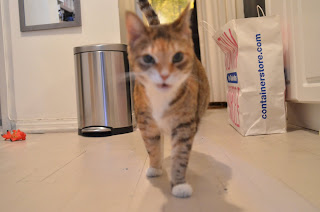