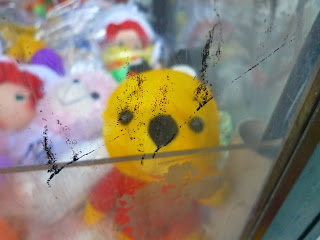 There is a passage in the book "Zen and the Art of Motorcycle Maintenance" that has stuck with me.  The book didn't appeal to me much as literature, but it is a thoughtful work that has some interesting ideas, though many borrowed ideas found there are just re-introduced from history as part of the story he is telling.

I found the passage, so I will just re-type it here:


"He noted that although you normally associate Quality with objects, feelings of Quality sometimes occur without any object at all.  This is what led him at first to think that maybe Quality is all subjective. But subjective pleasure wasn't what he meant by Quality either.  Quality decreases subjectivity. Quality takes you out of yourself, makes you aware of the world around you. Quality is opposed to subjectivity.

I don't know how much thought passed before he arrived at this, but eventually he saw that Quality couldn't be independently related with either the subject or the object but could be found only in the relationship of the two with each other.  It is the point at which subject and object meet.

Quality is not a thing. It is an event.

It is the event at which the subject becomes aware of the object.

And because without objects there can be no subject - because the objects create the subject's awareness of himself - Quality is the event at which awareness of both subjects and objects is made possible.

Now he knew it was coming.

Now he had the whole damned evil dilemma by the throat.  The dilemma all the time had this unseen vile presumption in it, for which there was no logical justification, that Quality was the effect of subjects and objects.  It was not! He brought out his knife.

"The sum of quality," he wrote, "does not revolve around the subjects and objects of our existence.  It does not just passively illuminate them.  It is not subordinate to them in any way.  It has created them. They are subordinate to it!"

- Robert M. Pirsig, "Zen and the Art of Motorcycle Maintenance" 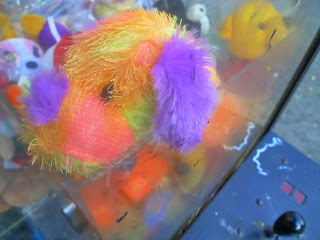 There is so much of genuine quality to see and experience in New York, but there is also the other.  I try to avoid all of the wide east/west streets here, the ones with both eastbound and westbound lanes.  They are denser in foot traffic than the rest and attract an agitated slovenliness of the soul, they are hostile spaces.
So much of my worldview has to do with the assessment of quality.  I am accused of being a snob on a regular basis, sometimes rightfully so.  I prefer quality to carelessness, mostly.  I prefer beauty in art to shocking social commentary, though you might not know that by reading these posts.  I prefer things that strive for an otherness to things that merely remind me of things as they are.  I prefer unexpected confessions of inner weirdness to anything that U2 has ever done.  I do not want to be reminded how to be moral in art, I would rather hear unpredictable personal disclosure, whether it is accompanied by remorse, ambiguity, or the desire to repeat.
I can make my own judgements, though I do thank Bono for his efforts at reminding us all to be human. Remember when Bono wasn't Sting, and when Sting wasn't Sting?
Canal St., Houston St., 14th, 23rd, 34th, 42nd, etc., etc.  Those are the streets I meant. All of these places fatigue the eye and the mind, the spirit.
I avoid them whenever possible, and avoid the people whose thoughts resemble those streets.  There is a cheapness to the human spirit that destroys me.  I don't mean the reluctance to spend, but rather the willingness to substitute.
A friend wrote me an email that said, "expectations are as satisfying as a line of coke."  I told her that I would steal that line from her, but after all of this moral and social opining, I just don't have the strength...
"Road to hell paved in unbought stuffed dogs. Not my fault." - Ernest Hemingway 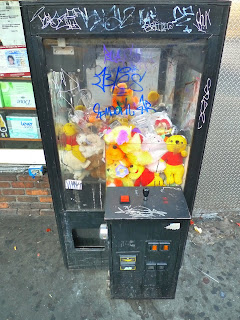