I have wanted to tell this story for several days. But I was afraid that I would tell it only in anger. I wanted there to be some humor in telling it.  I feel there was some humor in the thing.  When I relay the story to anybody verbally it is coming across only as angry.
So be it.
I recently went on a vacation to Colorado. Before leaving it occurred to me that my Florida driver's license had expired. I would need a valid license to drive the rental car in Colorado.  In New York you have up to one year after your license expires to swap it for an NYC license.  I checked into the requirements for swapping and there were a few that I was unprepared for.  The two main issues being that I needed a new visual test performed by my eye doctor and that I MUST have a Social Security Card.  Just having the S.S. # would not do.  I had to be in possession of the actual card.  Luckily there is a Social Security office on my street, just a block east of where I live.  So, I went down to the office about a month before we were leaving and brought with me all of the needed documentation.  When I was done I was told that it would arrive in the mail in 2-4 weeks.  I inquired about the possibility of rushing the card with extra payment but no such options were available.
So I waited.
I went to the eye doctor and found that my eyes hadn't changed much, but he gave me a new prescription anyway so that I could get a new pair of glasses.  I took a fresh picture of my retina off of the computer screen there in the testing room and told him that I used it as my Facebook profile pic and he warned me about the future and about how my retina is more unique than my fingerprint, identity theft, etc.  I assured him that nobody would want my identity, that along with it comes a soul-crushing inventory of shames and a catalog of ignominious but blurred memories.  He laughed but warned me that yes, even those might be desirable to the ne'er-do-wells of the future universe one day.
I left his office feeling better and with my eyes dilated so that all of the snow in New York glowed with an incandescent inner and outer glow, painful to look at, impossible to ignore.
When I got home I found my S.S. card in the mail.  Not the German paramilitary organization, Schutzstaffel, but the card from the Social Security office that I had mentioned earlier.  I opened the letter, verified all of the information as correct and put it with my other papers so that all was in order, and I was ready to apply for my transit papers....
So, I was prepared for the DMV.
I went to the DMV office two days before we were expected to leave for Colorado, where we could drink beer made by a man named Adolph without irony or nazi-sympathies. Sidenote: Coors, not Coors Light, is actually a pretty good American beer, though Adolph Coors was a supporter of many conservative causes, he still made pretty good beer.  Check out The Heritage Foundation and The American Enterprise Institute.  Adolph committed suicide but began a conservative legacy that was more fully realized in his offspring who went on to run the Coors company.  This alone should be enough to keep me from drinking Coors, but it is not....
So, I went to the DMV, armed with all of the necessary documents, prepared to wait all day to get my license.  When I arrived and found the appropriate line to be in I was informed that the computer system that enables them to trade out my out-of-state license with an NYC license was down and all transactions were being done manually by hand, which would add considerable time to what was already a lengthy process. We were all encouraged to reconsider this day as a day to perform our official state business.  I contemplated coming back the next day but thought better of it, as that would give me no time whatsoever to correct for any mistakes, so I stood in line for 2 hours.
Finally I made it up to the window where the process would begin in earnest.  I had a few questions and I began to ask them to the gloved man pictured below: 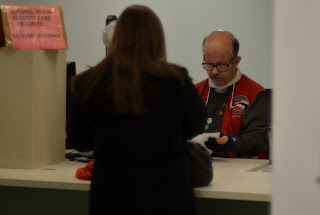 He told me that all of the information I need was provided on the website for the NYC DMV.  I asked if it wasn't possible for him to answer my questions since the reception in this government building wasn't very good and it was important for me to make sure I got this done today.  He said, No, that he wasn't there to provide information.

He then asked to see all of the necessary paperwork and I provided it all for him.  When he saw me pull my Social Security Card out of the envelope he asked me to sign it, so I did.  He then asked me to stand against the board to have my picture taken, which I did.  He then turned his back to me and prepared the documents for me to continue the process, then he handed me all of my paperwork and told me to have a seat.

I waited and waited, another 2 hours.  Finally my number was called and I approached the appropriate window to get my license.  I handed over all of my paperwork and the woman began to process the request.  Within a few short minutes she came back and told me that I wouldn't be able to get a license today, that the name on my Social Security Card was incorrect.  She showed it to me.  Sure enough, my last name was spelled incorrectly.  I stood there in complete befuddlement. I asked if there was any alternative identification I could use, my passport, credit cards, anything.  She said, No, that was a requirement, and pointed to the signs that were everywhere around the office stating so.  I walked numb out of the office and down to the street, all of my efforts thwarted by a bureaucracy run afoul.

I stood on Broadway below, outside the offices, looking from left to right, unsure what to do.  After a month of concerted effort it turns out that I would not get my driver's license before our trip, that my wife would have to drive everybody through ice and snow, and mountainous terrain, for days on end.  This was not good. This was not good at all.   I chastised myself for not recognizing the mistake earlier.  I stood dumbfounded at how the name could be right on the address portion of the paper but could be mis-printed on the un-detached card portion of the paper.

I pulled it out of my pocket, and out of the envelope, and looked at it more carefully.

The numbers have been removed for obvious reasons: to keep my eye doctor happy.  But look at the name on the card, specifically the last name, which should read CUSICK... 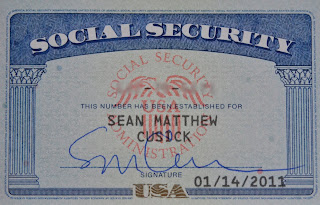 The modification seems obvious in this picture, but to the naked eye it was more deceptive. The subtext was clear.  I had to hand it to this bald albino rat, it was sort of funny.  By changing the I in my name to a D, he had partially spelled out the word DICK, and when one considers that the I is obscured in the DCK portion of my name, then the joke is complete, and the meaning unambiguous.
That I was not going to get my driver's license because of this penned change only added to the prank.
I turned around, went back up the elevator, went past all of the lines of people waiting, demanded to see a supervisor.  She appeared.  I explained that I had checked these documents and they were all correct, that the only person other than myself who had touched this card was her employee, and that if she examined it carefully she could see that the modification was made with the same pen that he handed me to sign the card just a few hours prior.
She examined the card with a magnifying glass, she laughed, she apologized.  She marched me back over to the desk where mole-man was working, gloves still covering his diseased, criminal hands.  I prepared for a confrontation.  She walked me to the woman working right next to him and whispered something in her ear and walked away.  The woman began the process all over for me.  I said, No, no, no, no... I had already been through all of this. I was at the end of the process, not at the beginning.  She handed me all of my paperwork and directed me vaguely to the other side of the room.  Mole-man sat there with his bald head down as if it were a forward-facing-blank-mask of sorts, obscuring his joy and deceit, garnished with a fading hairline and partially framed by his dangling glasses.
I walked back across the room to where the supervisor was already busied with other bureaucratic concerns.  I waited patiently as she helped somebody else and then I explained to her that I was already at the end of the line, waiting to get my license, not at the beginning. She asked to see my paperwork. She examined all of it and then walked away instructing me to follow her, leaving my passport on the far side of the counter, separated from my paperwork, her and me.  I leaned over the counter, alarming those around me, especially those behind the counter, recovered my passport and followed her to the window that I was previously at, where she instructed the woman to issue me the license, that there had been some sort of mistake.
In a few minutes the woman handed me all of my paperwork back along with an interim driver's license. I walked over to the supervisor where I could see that she was waiting for some thanks for all that she had done.

I told her that I appreciated her assumed authority in this matter. But that this issue was well outside of the DMV's jurisdiction, and that the FBI generally handles matters of government employees committing crimes involving the altering of federally issued identification documents.

I left the office, taking this last picture on the way: 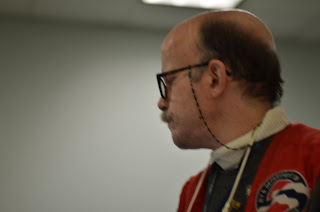 The response among my friends in New York has been both universal and strange:  "Why did you go to the midtown DMV?"  I patiently explain each time that it is the closest DMV to me and the office that one must go to in Manhattan when swapping out an out-of-state license.  I am then given all sorts of advice about upstate DMV offices and ones in the outer boroughs, and online options that simply would not function for me in the capacity that I had hoped, mail-in rebate DMV's, coupons, etc., etc.

New Yorker's are not helpful, they only need to feel better informed than others and will offer erroneous information as if it is actual help, when in reality it is a way for them to assert their NewYork'ness over yours...

So, that is what I am doing now...  Avoid the midtown DMV at all costs, and if you happen upon this miserable little dungheap of a human, then do not allow him to turn his back on you in possession of your identification.


I had been warned well by my eye doctor:

His head is that shape because he is from the future.... It is a bureaucracy plow.