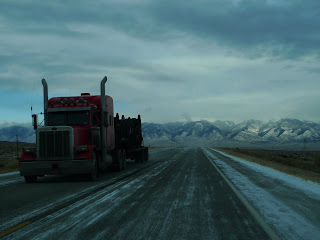 I remain unconvinced about skiing. The people we are traveling with have cajoled me into trying again, though perhaps not today. It is -30°F where we are up in the mountains somewhere near Silverthorne this morning, but it's supposed to get up to a blistering -15°F or so later today.... perhaps warmer.

We drove to Pagosa Springs yesterday.  The road was cold and bleak though beautiful at times.  On the drive home I took a wrong turn and we drove over an 11,312 ft. pass called Monarch, across the continental divide. The winds were blowing up the ridge of the mountain and across the road in such a way that it was impossible not to imagine how long it would take to die in that weather if the car were to fail, or we were forced to head out on foot in search of help, or happened upon by an angry and hungry lycanthrope....

Tonight is the new moon.  We are perhaps safe for another 14 days.


The picture below was a long exposure taken in Pagosa Springs.  I wish that I remembered more about basic astronomy. I would tell you approximately how many degrees of arc are seen in the motion of the stars.  It is very little but there is evidence there of the earth spinning through the cosmos and me along with it. 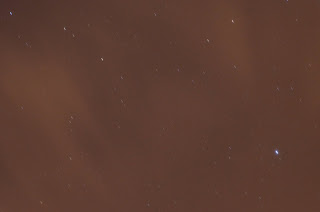