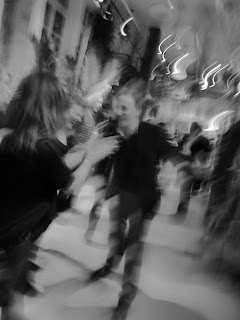 I tried to go shopping today on Broadway, in Soho.  It was the last chance that I would have to buy some Christmas presents.  I only had my lunch break, one hour.  From the moment that I began the single hour break it felt as if I was on an obstacle course of some sort. I understand that with crowds there will never be much unanimity of purpose, but it was as if they were being sent towards me with noxious intent from some unseen malevolent force.  They were everywhere, all going different directions, or worse, not going anywhere at all.  There would be groups of them in a doorway, discussing one thing with some people outside the door, and something related with another group of people inside the door.  This didn't seem to be abnormal behavior to them in any way, completely unaware of what doorways are actually used for. They only seemed shocked by the idea that somebody would try to physically traverse their boundary-breaking conversation.

They were lined up in slow-moving groups to carpet-block the entire sidewalk. This is easy enough to navigate around because there's always the street that you can hop onto for group passing.  But even the street was crowded with bag wielding wanderers, alone or in groups of two.  Every shop and store that I walked into had decided to re-stock the entire store, every aisle and walkway, while they were still open, rather than employ the traditional after-hours practice, even though the shelves were packed with product there were blue stock bins arranged in such a way that there was no easy exit.  One woman fell into one of the blue bins and I could hear it scanning her credit cards, there were red lasers, the sound of modems, etc.

Ok... so I made it to lunch, where they were also restocking the entire place.  I navigated myself towards the counter-line to order and after some effort, waiting and gentle gymnastics began to place my order.

A voice intoned, "We were next."

This was odd, I turned and looked and there were two people behind me, but I hadn't seen them anywhere at all, and there was a semblance of a line.  I eat at this place all the time. I know the very simple procedures and protocols.

She retorted, "No, we were before you."

I said, "That's impossible, I've been everywhere long before you, specifically here. That explains why you're behind me now."

This misguided dimple corrected me with nearly bovine rage, "You are an awful man."

I stopped trying, "Perhaps I am, but you will get worse now at a much greater rate than me, much of my decay has already occurred. You will be losing more, and much faster, than I'll ever be able to again." I took this moment of confusion to give my order to the girl who I know recognizes me from eating here all of the time.  She took my order without giving any indication that she was going to back me up or enter the discourse is any decisive way.

I moved forward as the LINE progressed and began wishing that I had a stealth-X91-fart I could leave, to mark THEIR spot in line for them.  But alas.... always there when you would wish them away, never there when you're getting written a ticket by a cop and could use some olfactory ambiance.  I took my food, after a quick hurdle setup, then a 10 meter sprint between the registers and the tables, I found an open spot and sat towards the window, where I always sit, facing the tunnel traffic.

I put my headphones on and wished the awfulness of the world away.  I had 7 minutes or so to eat.

I sprinted back to work in the cold, bags flapping in the wind like cardboard parachutes, spinning and hacking into my legs as I dashed north on Wooster.  I must have looked pretty crazy, running down the very middle of the brick street, against the flow of traffic, in defiance of Santa's record-keeping gift list, gift bags flapping in the wind, a crazed, desperate look around my eyes.


The mania of Christmas will soon be over, I prayed.

I will tell myself that it was only the extra sugar that I was eating that made me feel the way I did.


I've learned to live within a range of truth. 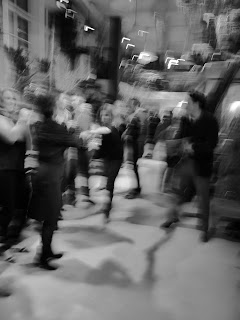