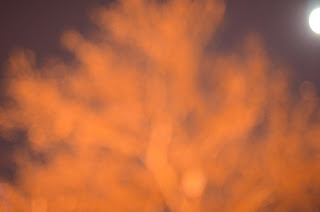 Tonight there is a lunar eclipse and it is the winter solstice.  There is no relevance between the two, but a rare event nonetheless, I'm told.  I'm waiting for the eclipse.  I have seen lunar eclipses several times but am always fascinated by them.  I will go outside and watch it in a little while, and for a little while.

Once when I was driving home with my girlfriend, late on Sunday night, having left the house on Friday night, I pointed out to her that the moon was passing through the earth's shadow.  We seemed like gods to one another at that moment.  We were high on ecstasy, eclipsing.

It was only a partial eclipse but it was still quite impressive.  Anything that can pull a curtain over the moon must be immense in relation to us.  For some lost souls it must be akin to a lucid moment.  So many stories have been told about jokers and jesters predicting a solar eclipse and being misunderstood as gods, or messengers for the gods.  I want to write the story of a crazed pied-piper of the moonlit lost, one who is able to calm and restore the unending wandering regiments of lunatics by a last-minute prediction of a lunar eclipse, preferably on a precipice...

Tomorrow is the birthday of a friend who has passed away.  I am going to dinner with his widow, a good friend, tomorrow night.  I didn't want her to be alone on this night, the first birthday with him in absentia infinitum.  So we will go have sushi, something that we all three used to do together from time to time.  Something that we all three often enjoyed.  I will tell her stories of him and his charms, and listen to hers.  It is a strange thing. I am looking forward to it, and not just because I love her, but because I miss him, and perhaps I haven't taken the time out to come to terms with his death.  I have avoided it, The only time I am confronted with it is when I am comforting her, mostly, and that is not the time for my emotions to matter, but rather hers.  Tomorrow will be no different but I am prepared to be there for her, and for me.


Somebody once told me a possibly apocryphal quote by Jack Kerouac. I don't remember ever reading it, but I hope he did say it...  "I wrote this book because we're all going to die."

Well, I'm writing this post because every atom in your body that's heavier than hydrogen has been in this universe before our sun was even born... take that, Kerouac.  Atoms are quite durable. You have approximately 50 atoms in your body that were also in the body of the man, Jesus of Nazareth. They are incredibly useful, these atoms, and they don't go away easily, or without an immensely dynamic and energetic fight. There were billions of them in his body and when he died, those atoms didn't leave the earth and ascend into heaven, they stayed here and were recycled. Elvis too, though you probably have less of Elvis than Jesus in you, perhaps as few as 3-5, maybe 7 Elvis atoms, because of time, depending on how old you were, and whether or not you've lived in America that whole time.  It is science, I promise, but there is much speculation when it comes to Elvis atoms....

Here is where it gets weird.... Because Hitler apparently set ablaze himself and his fruitless Eva, his and her atoms were spread across all of Europe, and into the life chain of all those there at the time.  As simple combustion only speeds up the rate at which atoms travel, it has virtually no effect on the strong nuclear principle which makes them the fundamental thing of what they are. So, each of us, Jew and Gentile alike, has perhaps as many as 10-20 atoms inside of us that were also in Adolph Hitler, or Eva.  Disturbing, yes.  But thankfully these atoms do not have any known political affiliations.

Every single bit of gold in the universe came from the center of an exploding star.  Again, all of these atoms that we have shared throughout the ages came mostly from other systems.  Intense galactic and universal events are the stuff we're mostly made of, not just shadows, and führers, and saviors... Even light, or something very much like it, was slowed down over millions and millions of years to become physical, with weight.  That is what we are, slowed down light, sort of.  Weight seems to prefer weight, so atoms congregate and stick around. We are all star miasma.


Kerouac, his name sounds like a type of arcane and specialized karate.