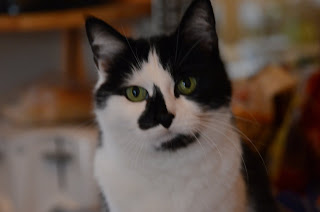 (Jennifer)
My friend over at selavy recently suggested that I am like a cat and he is a dog, sort of.  I forget exactly what he said, but it was something like that.  He said that cats are edgier.  Perhaps.  He is currently trying to shake his addiction to Nyquil, wondering why doctors won't give him the morphine he's always demanding.  It's a mystery, he claims to have insurance, etc.

I've always found it funny... the conversations people have about their preferences between cats and dogs. They apply all sorts of traits to the species that they believe they themselves possess. Then they align themselves with one species over the other, only to sing their own praises through the poor unwitting creatures, as if the dog or cat understand and share these ridiculous notions.... I am thinking of one friend in particular and his vague detesting of specific dogs.

When I was typing the word vague I accidentally typed fague instead. Funny. Freudian typing... When relaying these conversations to my wife, and discussing my friend's alignment with cats, and his supposing of their advanced intelligence, her response was simple, "Then why aren't there any cats on David Letterman?"...


I've always liked both dogs and cats, having grown up with both.  For my 2nd birthday my mother gave me a cat, Skippy.  He lived until I was 17. My mother used to love to tell the story of his death, about how he held on until he could see me one more time, knowing that I was coming home from school.  He didn't wander off like cats will often do, but instead came in and died right in front of us, right in my mother's arms, meowing at me.  It was strange. He seemed to always know that he was my cat.  He would sleep in my armpit when we were both young.  He far outlived his bluejay stalking partner, Bo, who also used to sleep in my armpit until I got a boil from it and my mother nixed the sleeping arrangements we had.

Both cats, and a collection of dogs, mostly a little mutt and and greyhound, whose names I never liked: Ginger and Farrah, were always around when I was growing up.  Ginger was named because she was the color of ginger snaps, a cookie snack I'm not sure if they still make, and Farrah because her fur was the same color as Farrah Fawcett's hair (my mother named these poor beasts...).  So, it wasn't until I moved to New York that I didn't have a pet, or several, around me all the time. It is one of the things I miss about living in Florida: having plenty of space, and a yard.  Though we have a great dog now, Barkley, that we shower with love and perpetual affection.

My friend in Rhode Island says that her favorite posts of mine are when I write about Barkley.  Animals have a strange power over us, over some I should say. They certainly charm me.  They redeem life in a way, remind us how to be about certain things.  It is a simple arrangement. Very little makes me, or Barkley, as happy as me coming home.  I can hear his scurrying feet against the wood floor when my key hits the lock in the door, searching desperately for a toy to present me with.

Wouldn't life be much better if we all just had stuffed toy bunnies to present one another with when we haven't seen each other for a couple of hours...  that, and morphine, of course. 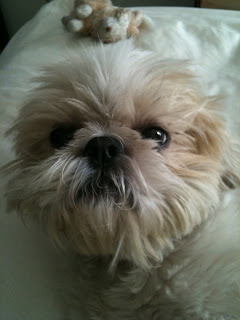